Attack of the Glow-in-the-Dark Ninja Commandos!

Location: I could tell you, but I'd have to kill you. Ok, ok. It was Detwiler Rd and environs in York, PA

Dogs Chased By: None (One barked at me, but he was chained to the front porch. HA HA!)

As the days grow shorter, one of my challenges as a runner is to get my distance in before work in the morning. Even though I work from home, there's just not enough daylight to safely run 7-10 miles before work, since most of the roads I run on have questionable visibility for drivers even in daylight, and narrow to nonexistent shoulders. I can head down to my parents' neighborhood, a more typical suburban area with wider streets and some sidewalks, but getting up even earlier is not high on my list of priorities. Of course, there's even less daylight after work, since it's pitch black by 5:00 these days.

Thankfully, evil genius scientists have solved the problem for me. At the Philadelphia Marathon (and Half Marathon) Expo, I purchased two new products that I used for the first time on a run last night. 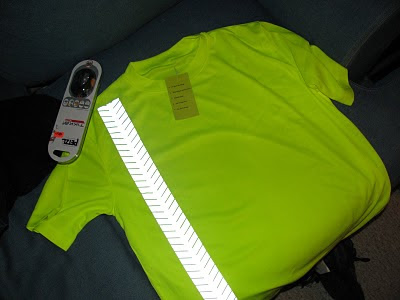 1. Petzl Tikka XP2 60 lumen headlamp ($40): As the name implies, it's a small light that attaches to my forehead via an adjustable strap. Yes, it's just as dorky as it sounds. On the plus side, if any miners ever need rescued in the York area, you know who to call. Through a combination of two lights and an adjustable wide angle lens, the lamp has several settings:2. Reflective Bright Yellow/Green Running Shirt from RuSeen (the name of the vendor stand where I bought both products) ($20) -- a very brightly colored shirt with a reflective strip that runs up one side of the front and back. It's completely cool and stylishly trendy, and it was comfortable and seemed to wick away moisture as well as any other technical shirt.

Did they work? Yes. I didn't get run over.

The run itself was a fairly pedestrian affair. My legs were still tired from the half marathon, so I think 10 miles might have been a bit ambitious. However, I'd run 10 miles two days after one of my fake half marathons two weeks ago, so I think it was at least a defensible idea.

Running at night will take some getting used to. My previous nighttime runs were at well-lighted corporate parks while on a business trip, and running in the dark in a residential neighborhood was quite a bit different. Even with my headlamp, I need to be a lot more careful. If I'm going to run in the evening or night more often, I also need to learn how far in advance to eat. A pre-run slice of pizza, 3 hours before starting, was a bad idea.

The best thing about running at night -- other than no longer being a slave to the circadian rhythms of the human race, of course -- was that, with my headlamp pointed 5-10 feet in front of me, I barely noticed the hills. 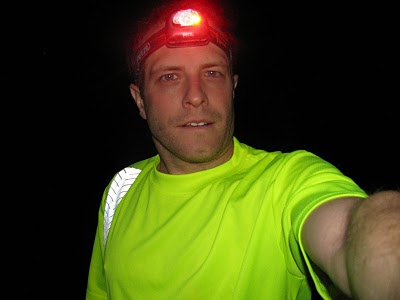 Day? Night? When you're cool, the sun shines on you 24 hours a day.