A little over 16 years ago, I got turned down for a date.

Since this is Earn Your Donuts, and I've got a long, rambling story for every occasion, there's obviously a lot more to it than that. The point isn't that I got turned down, it's that I asked at all.

In a previous episode, I admitted that my random placement on Founders B-2, resulting from a non-selection of "no preference" regarding dorm placement, had played a huge part in making my life what is today. Most of my closest friends are my college friends or people that I met through them. I met my wife through one of them, and took a job in Philly after graduation, which led to the job I have now, to be closer to her.

But luck will only get a guy so far. This is the rest of our story -- my half of it, anyway.

It was the icy winter of 1996. I lived with a bunch of antisocial jerks who were my best friends, my classes were easy, life was basically good. My track record in meeting girls -- women, I mean! -- was not good. I had one date in high school. Not girlfriend -- date. My longest relationship -- if it even qualifies -- was two weeks.

Confidence levels were low, but I decided just not to worry about it. Hang out. Play video games. Lose at sports. Study really, really hard. Enjoy college life.

But then I met her. I met her at a college dance in the Annenberg Center on a Friday night. She was talking one of my friends who introduced us. Her name was Chris (it still is, actually). She was with a friend from home, who was visiting that weekend, and the four of us went wandering around frozen Etown till about 2am. The next night, after a comedian, same thing.

We hung out a couple of times. I wanted to ask her out. I think I even may have tried to imply it. But I was terrified. I did ask her ask to the Valentine's Dance. But that's not a date! I mean, maybe it's a group date, but not really a date. She turned me down, anyway.

Luckily, it wasn't because she thought I was weird or creepy, but because she had a forensics tournament that night. Unluckily, that meant I had to work up the nerve to ask again!

The chance presented itself a little over a week later. The men of Founders B-2 had just returned from another double-digit loss on the intramural basketball court, and I had a "Writing & Language" paper due at 8am the next morning that I had to start.

This was the perfect chance to go talk to her. But I had no guts. And I had a paper to write. Without the rather threatening intervention from Loic, our exchange student from France, I may have missed out on love. Basically, Loic was twice my size and he yelled at me until I asked her out.

But, I did ask. And luckily for me, she said yes. Our first date was 16 years ago today at Mookies, which no longer exists. Luckily, the site of Mookies is now occupied by TJ Rockwell's, a restaurant well-known to any Elizabethtown College graduate. Tonight, like we have been almost every February 28 since we moved to Central PA, we'll be at Rockwell's, celebrating that memorable evening 16 years ago. 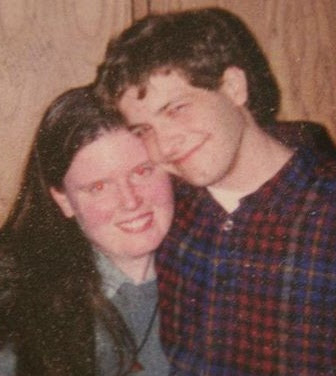