Coolrunning.com's Couch-to-5K Program, I'm sure, has helped many, many people begin running and train for their first 5K.  It's been helping me go back from lazy, post-surgeried couch pototato to elite (ha!) marathoner in just a few short weeks.

Again, just kidding.  I've been doing the Couch-to-5K program since July 19, which is 8 weeks.  There were a few "weeks" of the program that I repeated because I felt like I was still struggling to complete them, and then held myself back again over the last two weeks because been sick with some bad summer cold or upper respiratory infection.  Basically, I've been stuck at "week 4" for about 3 weeks now.

And here's the thing -- I think, if I follow the plan, I always would be.  From weeks 1-3, I think the Couch-to-5K progresses pretty reasonably.  I felt like I needed a repeat of week 3, but then bumped myself up to week 4 and was able to complete several times with mixed success (again, allergies and respiratory illness make for bad training partners).  The jump to week 4, where you are running 5 minutes at a time and your walk breaks are NOTICEABLY shorter, is a big one, but I don't think unreasonable. 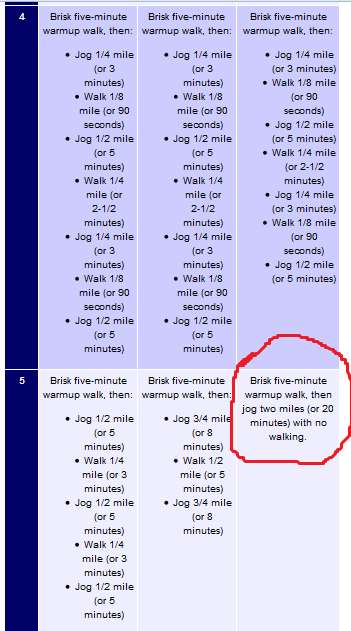 So let me get this straight, Couch-to-5K.  The longest you've had me run is 5 minutes, and one week later, I'm supposed to run TWO MILES?    The progression to those first two workouts of week 5 seems reasonable, but going from running 8 minutes twice with a 5-minute walk in the middle to running for 20 minutes?  It seems like there needs to be another week or two of transition in there.

Oddly, it seems like once cross this gulf, the plan proceeds pretty reasonably once again, and it seems like the plan is transitioning the trainee from a program of 3 equal workouts per week to two run/walk workouts and then a "long run", which is how must runners train for longer races.  So, in breaking this down and criticizing it, I do think I see the logic behind it.

At any rate, I feel like I could do week 4 over and over and not really be ready for week 5.  It just doesn't seem like, without doing a lot of other cardio (and maybe that's the point, that I should be!) this this is big leap forward to be expected of new runners.

So, this is where I get off, Couch-to-5K.  I'm back on the "Run half a mile, walk for a minute, run half a mile" plan that Chris and I have used on the 5Ks I've run w/her the past year and a half.  I used this back in January to try to train myself back up, hoping that I'd successfully physical therapy'd myself through injury. I've done this twice now this week, and there was noticeable improvement the second time, but I suspect it had more to do with the weather being 20 degrees cooler than any actual improvement in fitness on my part from Wednesday evening to Saturday morning.

Basically, what happens is I'll do this as-is for a week or two, then hopefully be able to get through the first mile with no walk breaks, but probably still need them on the second mile.  Then, hopefully, the next week or two I'd need the walk break at the end of the first mile, but then be able to get the second mile without walking.  When I can run 2 miles with no walk breaks, I add some back in and try for 3, and after a few weeks of this, I can hopefully run a 5K again.

Email ThisBlogThis!Share to TwitterShare to FacebookShare to Pinterest
Labels: couch to 5k, injuries, running, training, week 5 is a bitch