This is not a politics blog.  Hell, it's not really even an active blog, anymore.  But it's the platform that I have, so I'll use it...

But, I wanted to write down what I have been feeling over the past week, one that I think will be remembered as one of the most tumultuous in American history, but I hope will not be seen as the beginning of its end.  I know that I don't come off very well in this, but I don't want to hide from that.  I want to take my medicine and grow as a person.

I was, and still am, a proud liberal.  A progressive Democrat.  An ally.  Woke AF (I thought). Knowledgeable and educated and overconfident and stuck in an echo chamber of my own making.  Call it what you will, because on Tuesday night, what I considered my side was soundly defeated, and I share the blame with millions of others.  Donald Trump fed more openly on racial prejudice, religious bigotry, xenophobia, and misogyny more than any other candidate in my 40 years.  I was not alive for the campaign of George Wallace or the presidency of Andrew Jackson, but Trump made no real attempt at all to kick the racists out of the room. Instead, he blew that dog whistle long and loudly, calling Mexican immigrants rapists (and some -- he assumes -- good people); threatening closure of American mosques and a ban on all Muslim immigration "until he figures it out" (keep in mind his Twitter account was taken away from him!); the return of stop and frisk and the vilifying of Black Lives Matter; a lukewarm denial of David Duke's endorsement and a continued flirting with alt-right media, whether retweeting racist symbols, or the presence of his proxies on White Supremacist media.

He's also a serial liar who is completely unqualified for the office of President.  All those things should have disqualified him.  The "Pussy Grabber" tape alone should have disqualified him.  Hell, Mitt Romney, who was sane and smart and professional even though I disagree vehemently with his politics, got burned for "Binders Full of Women".  What the fucking fuck does that even mean?

I like Hillary Clinton, and I came to like her more and  more through the course of the campaign.  I voted for Bernie in the primary, and I was always going to go Democrat in the general, but Hillary graded out nicely (especially compared to Trump!) by the fact checkers, she's undeniably smart, extremely experienced, and while I think she is not a great orator like Obama, she seemed Presidential.  Serious.  Prepared. Thoughtful.  But also kind and compassionate.  There were always disadvantages, some obvious and some apparent in hindsight.  She had the baggage of an email scandal; an image tarnished by a partisan extended investigation into Benghazi; and perhaps Bill's infidelities (and blame erroneously placed on HRC for them!) cost some of the moral high ground she had over "Pussy Grabber"; and, tragically in 2016 -- her voice is called shrill.  She could never attack Trump as sarcastically and bitingly as Bernie, Uncle Joe, or Obama.  But still, America would choose her over a serial liar whose political fame is built on a bullshit birtherist conspiracy, right?  Yes, there was baggage, much of which belongs to Bill, but I could clearly see within her a good person who fought her whole career to make a better America compared to a blowhard narcissist who only cares about himself.

Obviously, I despise Donald Trump.  However, I was very much compassionate (I thought!) to Trump's appeal. Much of the country has not prospered during the last 8 years. Manufacturing jobs continue to leave our shores, the great steel mills of northwest Indiana, where my mother's family hails from, doesn't employ whole towns anymore. Income inequality is rampant, and both a call to "Make America Great Again" and Bernie Sanders' populist message about income inequality resonated.  But, even with some shenanigans by the DNC, Bernie was soundly defeated in the primary, and it's not clear whether Trump would have won the Republican nomination if it had rallied around a single candidate.  But still, I feel like I understand the appeal of his central message.

But even as I saw that appeal, I just didn't see how anyone could look at this man, Donald Trump, and see a good person or really anything but a con man, and I was not shy about blabbing it to everyone I knew, and a lot of people that I didn't know, on social media.  I donated to political campaigns against him, the first time in my life I've given money to them.  I watched the polls.  I obsessed over the polls.   I watched them run neck and neck up until that first debate, when he brought up temperament, and Hillary laughed at him, along with (I imagined!) all of the country.  Then more stories about her e-mails --- even while his scary ties to Russia, Trump University, a bullshit foundation that he doesn't even contribute to, and an alleged rape case were being ignored.  I cringed as the gap in the poll narrowed, and sighed with relief as she appeared to pull away again.

That Tuesday morning, I walked up to my polling place feeling confident that I was casting a historic vote, helping to elect our first female president and issue a nationwide proclamation against white supremacy.   Despite Trump signs outnumbering Clinton signs in my township by hundreds, I had been confident.  Yard signs don't vote, and Philadelphia and Pittsburgh would help keep this key state blue.  When I arrived at the polls that morning, though, the lines were much longer than I'd ever seen, and it was like walking into a (small) Trump rally.  Trump signs at the polling place, a Trump tent with volunteers outside the door, and almost every voter in line besides me having a Trump hat or pin.  No one was doing anything wrong, but I could tell that central PA was coming out in force in a way they had not in any election since I'd moved back here in 2004.

But the early voting and exit polls still seemed to favor a Clinton until that evening, as state after state was too close to call long into the night before the key states of Florida, Ohio, Michigan, and even PA turned red. The story that was told long into Wednesday morning was one of deep division, a Trump electoral landslide even as Hillary Clinton won the popular vote.

My response was shock, and anger.

And later, as the chances of a Clinton comeback dwindled to zero:

So, I still don't see anything but a con man, but I see a con man who will take the Oath of of Office in 2 months.  And I am crushed.  I feel like my indeed I stand by every bad word I ever said or wrote or thought Donald J. Trump.  And I also feel guilt, like my generation had a chance to stop the rise of a Hitler-like figure, and we failed our test.  Do I really think that we woke up in Germany in the 1930s or that Trump is the equivalent of Hitler?  On Wednesday morning, yes I did.

But as I've processed my emotions over the past few days, I know that is wrong. I hope that America would not stand for such a thing and I've been reminded over and over that there are good people on both sides of the political spectrum.  I know that the VAST majority of Trump voters aren't racists or bigots and didn't vote for him because he is one or because David Duke also likes him -- and that even though I accused them of a lack of compassion toward minorities who stand to suffer under a Trump administration, I know that I was just as guilty of a lack of compassion toward many of his supporters.  I knew that I needed to reach back out to people that I may probably insulted (and the full fury and extent of my facebook rants on news media pages are not shown here, just what I wrote on my own page and not including comments). 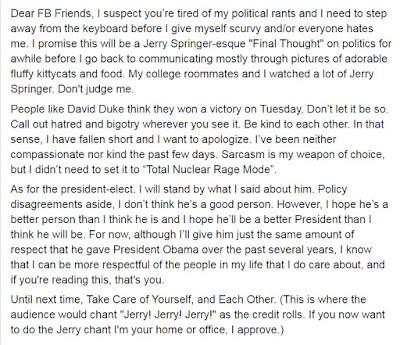 So, take a minute to do the "Jerry" chant, if you've read this far.  I promise to give no respect to President Trump until it is earned. I stand by my criticisms.  But still, my smug brand of liberalism must end.  Liberals and conservatives need to listen respectfully to each other.  They need to read each other's books and have dialogue rather than arguments.  And their congressional representation needs to remember how to cooperate and compromise for the greater good, not just how to obstruct until their party gets back into power (I'm sure the Dems were just as bad during W's presidency.

I know I sound like a total asshole in this blog entry, and that's because I am one.  I hope I can change that about myself and be receptive to other points of view.  It's safe to wonder whether Bernie or Biden would have won this election.  I think Hillary would have been a better president than either one, but they might have been a better candidate.  Just like I think Kasich or even low-energy, but normal and kind-seeming Jeb Bush would be a much better leader than Trump, but could not have rallied the level of enthusiasm needed to win.  Those are all questions for the parties and their strategists, because what's left for Americans is to fight for what we believe in. Fight compassionately and respectfully, but fight.  For me, that's this:


Trump has already walked back some of his campaign promises.  He might not be as bad as I think.  Perhaps he won't build a wall, or prosecute Hillary, the move of a third-rate banana republic dictator, start crazy wars, or try to appoint justices to overturn Obergefell vs. Hodges or enable open bigotry. I hope people and the country prosper under his leadership, even while I still think he's a terrible person who shouldn't be forgiven for empowering the worst racist elements of American society with his rhetoric.

Long live the resistance!  This day we fight. 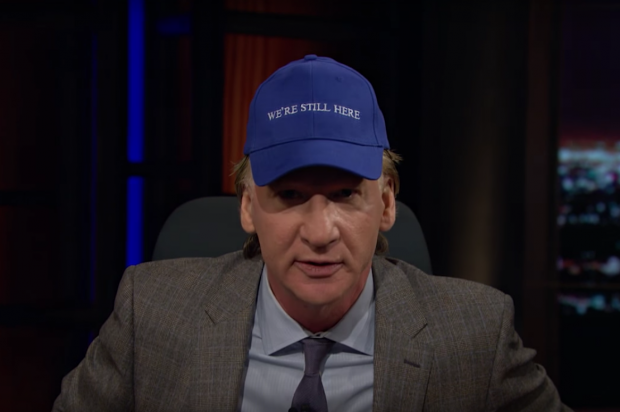