Hmmm....it's gotten a little dusty around here, hasn't it?  I think this is the longest I've gone without a post since starting this blog, in this case mostly due to lack of time, but also because I've been pretty uninspired lately and several "I went running around Manchester and Mt. Wolf for 5-6 miles and it was humid my legs felt crappy" posts in a row don't do anyone any good at all.

1. This is SPARTA!!
So, yeah, this Spartan Sprint race thing is tomorrow.  It's going to be 5ish, muddy, hilly, obstacle miles and I'll probably die because that's about the distance I'm stuck on lately, and other than two trips over to the playground, I haven't trained for any of the obstacles. I'll put up a very self-deprecating race report on Monday.

In my minimal Spartan Race training, I went with Chris on my first ever real trail run on Saturday.  (I don't count the rail trail).  We ran about 3 miles in 40 minutes on the Lakeside Trail and Old Farm Trial at Gifford Pinchot State Park, in northern York County.  It was challenging, fun, and most importantly, shady.  The day was scorchingly hot (highs got up to 102 and it was in the 80s that morning). but the shade kept it much cooler, albeit still very humid in the woods.  It's definitely something to mix in, although I need to really start adding distance to have a shot at a half marathon in the fall, and my paralyzing fear of snakes probably will keep me from being a more than occasional trail runner, anyway. 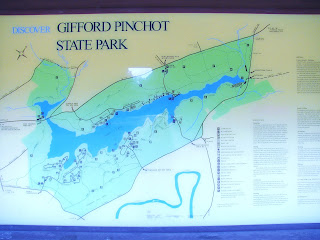 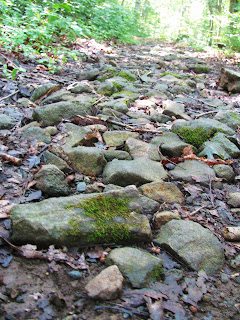 Photos from Chris at nevertrade.blogspot.com, who ran with me on Saturday and had run the same paths the previous weekend by herself.

3. It's Just One Mile...
If I feel ok after Spartan Race, and even if I don't, I'll probably try the Harrisburg Mile next Wednesday.  I've had the busiest two months of work of my life, and I haven't done any speed training, and am indeed barely hanging on as a runner in general lately.  But even though my chances of a sub-six-minute and even a new PR are probably not good, I realize that I'm probably approaching the end of my natural peak as far as speed and I'm running out of chances.  I'm 35, and without changing my training style it's probably downhill from here in the next year or two.

Because I've never really done speedwork, I think I can speed train myself to better results in the future (so the quest for 5:59 isn't over even if I bomb -- as anticipated -- this year!) even if my natural speed declines.  However, I think in a year where I've already gotten new 10K, 8K, and 5K PRs, that there's no reason to not try the mile.  Plus, there's free beer at the end.  Free beer.

So, that's probably two race reports next week, and then this unofficial blogging hiatus will likely continue.