Running is Stupid and No One Should Ever Do It

Today I ran 3 miles.  It felt like 26.  Not quite 26.2, maybe, but pretty bad. As I was arriving back at the house and limping up the stairs I thought to myself, "last year, or even eight months ago, this would have just been a nice little jog."  I need to make it that way again, it's no one's fault but my own that 3 miles seems like an epic struggle right now.  I've had bad luck with injuries this year, but the real problem is I just lost my motivation somewhere along the way, too.

In January and February, I did push myself to come back from the same injury that cropped up again in September, and when I did start running, I made quick progress.  I had shin trouble in September, and just kept doing a whole lot of not very much for the next two months.

And even though I started running again earlier this month, it's been hard to tear myself away from work or get my lazy butt out there in bad weather to run.  Today's 3 miles in 28ish minutes (I'm guessing, forgot my watch) was a struggle, but it was great compared to the crash & burn 5K I had last week at the local Jingle Bell 5K, where it took me 3 walk breaks to finish the race.  (I accidentally erased my race review somehow, and am not especially inclined to rewrite it.)

The last few weeks have reminded me that I really don't like running in and of itself, and the only way to make it tolerable is to get myself in better shape so that I can run normal or longer distances without being a huge wheezy mess.  It also told me that there's basically no way I'm running a marathon in March, so we can write off "Comeback 2012" as a huge failure.  I'm now signed up for the half marathon at Shamrock, which seems like it might be more realistic.  Maybe a full later in the spring or in the fall of next year, or maybe never again, but that's a decision for when I'm not quite this negative.  I'd like to do at least one more full marathon, even if it's my last, but again...I'll worry about that when four miles doesn't seem like an insurmountable challenge. 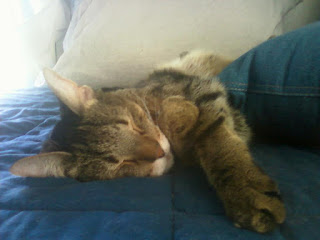 This is how lazy and unmotivated I feel, lately.  Just not this cute.
Posted by Brian at 12:55 PM