A little over 15 years ago, a tiny, mostly black kitten tried to claw his way up the leg of my jeans.  I was less than thrilled with this.  My girlfriend, Chris (who is now my wife),  had adopted this little cat, Pooka, and his brother, Higgy, the prototypical brown tabby, over the summer before our senior year of college.  I was less than thrilled with this.  Pooka passed away very suddenly yesterday, and now that one of my furry buddies is gone, I'm a complete wreck.

He was a great friend to us, and I'll always remember him.  He was always happy and outgoing.  After Chris adopted him, he adopted me.  I didn't particularly like cats, but Pooka decided that I was his friend, and he was going to pal around with me.  It didn't take long for me to grow very fond of the big, black, happy cat.

In his mind, everything in the house belonged to him and everyone in the world wanted to be his friend.  If you talked to him or petted him, he would be purring in seconds.  If you started petting him, there was a great chance that you had made a friend for life and an excellent chance that he was going to roll over to expose his tummy for rubbing.  Indeed, it was very common, as I walked around our house, to randomly come across Pooka lying on the floor with his tummy up in the air, purring.  He was a big, friendly, noisy presence in our house.  It feels empty here without him, and we will miss him greatly.  He was a great friend, and we could not have asked for a more awesome cat.

This sad day could have come 10 years from now (15 corresponds to roughly 80 in cats), and I never would have been ready.  That said, I'm thankful for every day that I had with my great, soft, purry friend, Pooka the Cat. 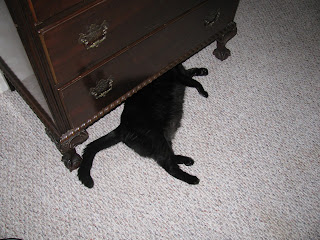 Pooka was not as good at hiding as he thought he was. 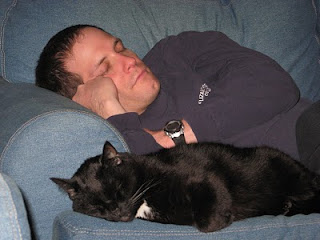 Post-race naps will not be as cool. 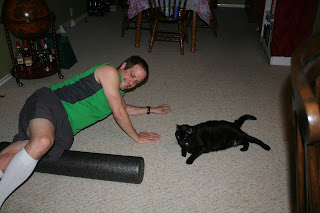 Foam rolling will never be the same.  Pooka always stretched with me before a run.
Then, he would run the four feet to the kitchen in world-record speed.
He usually made funny cat noises when he ran.

He was soft, cuddly, and good-natured, but he was also a fighter.  He had a lot of medical issues over the years and he always came through it with his good Pooka cheer intact.  Thanks to our friends at Valley Green Vet Hospital, he got to be an active, happy kitty for over 15 years and he was his cheerful self right up until about noon yesterday.  I'll never forget the time he came back home after having bladder-stone surgery when he was around 8 years old.  Drugged-up, he stumbled out of his cat carrier, took two steps and fell over.  I was concerned, but when I went over to check on him, he was already purring. 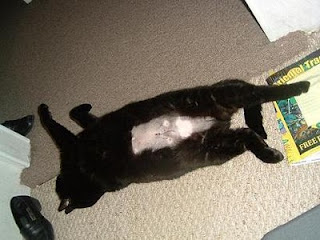 After surgery, his tummy looked like it had a happy face on it. 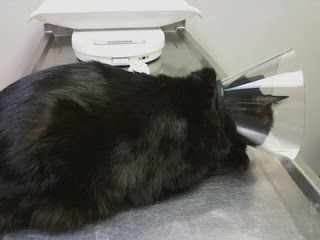 Or lastly, just a few months ago, when a pinched nerve or related issue caused one of his back legs to be paralyzed, it wasn't long before he was climbing out of the big bin that I'd made into his nest.  He never quite walked normally again, but just a few days ago, my wife and were marveling at some of the jumps our big old kitty friend would still attempt, and make.
I could go on, and on, and on with my favorite memories of Pooka.  But mostly I'll just remember how soft he was, how loud he purred, how friendly he was to both his biological brother and their younger adopted sister, and just how happy he was and how happy made us.  You're perfect, Pooka, and I'm glad we got to go through the last 14 years together. 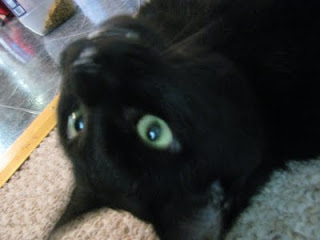