Race Report: 2013 KidsPeace Trick-or-Trot 5K, or "Preparation is for the Weak"

For all my many faults as a runner and a human being, I'm usually pretty good at preparation.  I have all my stuff laid out the night before the race; I've trained; and I get to the starting line early so I have plenty of time for extra, ahem, bathroom breaks.

This morning, Chris and I ran the KidsPeace Trick-or-Trot 5K, which started at Camden Yards in Baltimore, MD.  Let's review my prep:

We got there, picked up our bibs and shirts at approximately 7:55, thinking we had plenty of time to go back to the car and ditch my wallet and giveaway shirt.  Instead, the guy at the registration table said "Think of it this way, you're really early for a 9:00 race".

So, I tied the shirt around my waist, zipped my car keys and wallet into the back pocket of my shorts, and set out for the start line.  Chris did the same, with the extra encumbrance of a zip-up hoody that she wasn't planning to run in.

The race started out adjacent to the Warehouse at Camden Yards, and within the first two minutes I knew I had a problem -- my shorts were going to fall down due to the bouncing of my keys and wallet.  Either I was going to have to keep one hand on my waistband at all times to keep hiking them up, or downtown Baltimore was going to see my ass.  I chose the annoying, but not quite as annoying, option of running the whole race with my phone in one hand and my wallet in the other hand, checking frequently to make sure I was holding it in a way that my debit card didn't go flying.

Still, despite our lack of prep and my complete slackerage as a runner over the past month, I think we did ok.  We stuck to Chris' run-walk plan of walking for a minute after every half mile.  I could tell I was out-of-shape, but except for two steep hills, we stuck the plan the whole way, instead of taking much more frequent walk breaks like we did at our last 5K, Boordy Vineyards in August (which, in our defense, was much hillier!).  I'm as heavy as I've ever been in my life, and I get winded chasing our cute kittens around the house, but my legs felt great during the race, with no trace of my compartment syndrome, so I think the PT I've been doing since the summer has really helped. 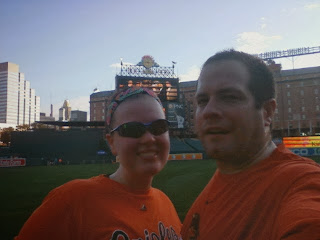 Race Report
As much as I sucked in preparation, the race organizers were the complete opposite.  I thought this was one of the best marked and best organized races I've ever run.  There were plenty of volunteers or police marking every turn; there was ample food and drink at the finish line (I love hot dogs, but not at 9am!  I had a delicious cinnamon roll, though); and there was a very nice presentation about the KidsPeace organization (which helps place kids in foster homes) that then continued into the awards ceremony.  And, the race finishes on the field at Camden Yards?  How can you beat that if you're a huge Orioles fan?  And how can you not take the opportunity to crash into the padded outfield wall as if you're Adam Jones robbing some Red Sox or Yankees jerk like David Ortiz or A-Rod of a steroid-assisted home run?

Really, really great job on this one by KidsPeace, the race directors and volunteers, Baltimore City Police, and the Orioles on this one.  This is definitely a race I'd come back to. 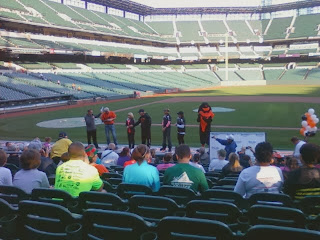 (The guy in all black in the middle is O's Manager Buck Showalter.
The big bird on the right is the Oriole Bird.)