A New Year, But More of the Same

Running Year 2014 neither started nor ended on a really good note for me.  I struggled with my injuries again early in the year  and finally had the surgery. After a rehab that was longer and tougher than I thought (but still probably not bad compared to other surgeries), I started running again, starting from the beginning with the Couch to 5K plan.

It's been a mix of good and bad results.  I think my progress had been a little slower than I thought, and I know that I had let myself get more out-of-shape than I thought, too.  In November, things seemed to take a turn for the better.  I ran a good 5K with no walk breaks t the Kid's Peace Trick or Trot in Baltimore, and then and even better (compared to current expectations, not my PRs back in my "prime") 10K at at the Rocky Run.  I started running four milers in Manchester, and I could feel myself getting stronger.  And then...

On December 8th, I went out for a five-mile run, hoping to get one five-miler in before the Celtic Solstice race that Saturday.  At about 2.5 miles, my calves were tight and sore, and I made the strategic decision to take a shortcut back to my car.  I hit the three mile mark and began to walk, and I realized from the dead feeling in my legs and the lack of full range of motion in my left ankle due to the swelling, I was having the compartment syndrome symptoms again.

I rested all week, and did a lot of stretching, and felt much better for the Celtic Solstice 5-miler.  I'm not sure I got another run in that week, but the next Saturday (Dec 20), I did 5 miles on the rail trail in which my compartment syndrome was ok, but my right knee was very sore.  I think it's my IT band, and I know I've managed that before with stretching and exercises.  I was not terribly concerned.  Knee pain also limited me to two miles on December 23.

Then, the bad one.  The next time I went out to run was the Saturday after Christmas.  My plan was a 2.5-mile out and back on the rail trail north from Hanover Junction.  I was struggling on the "out" part, and should have known to turn back well before 2.5 miles, because by that point my compartment syndrome symptoms were in full swing, and it was a long walk back to my car.

What the hell?  I've lost most of the last three years of running with this problem, had surgery, and it seemed like I'm no closer to having under control than I was at the end of 2011, and I just don't know why I'm ok -- or mostly ok -- sometimes and then other times I'm in pain after just a mile or two.

I need to find the pattern, and isolate what factors will make a difference, because I just can't let every run be a roll of the dice.  If the specter of compartment syndrome pain hangs over every run, there's no way I can dream of half-marathons and marathons again.

Part of me thinks it's just time I accept that.  Even if I ONLY run distances of two or three miles, it's still good exercise.  I like 5Ks.  I could still probably run them, although usually on my bad compartment syndrome pain runs, it sets in before three miles.

I'm not ready for that, though.  I want to unlock the formula for controlling this, and find out what separates the good symptom runs from the bad.

The first variables I'm playing with are hydration and diet.

I enjoy alcohol in moderation, but when a Christmas party left a huge surplus of beer, I started having a single drink on nights of the week on which I normally would not imbibe at all.  The first run in which my compartment syndrome symptoms flared up was two nights after that party, in which I had several drinks and ate lots of salty foods.  I was probably super dehydrated.  The second bad one, on December 27, was the morning after a friend had had dinner with us the night before.  I didn't drink to excess, but I had more than I would normally have the night before a long run.

In response, I'm drastically cutting back on alcohol consumption.  Since most of my long runs are on Saturday, that means no beer during the week or on Friday night.  It also means I have to really make an effort to drink more water.  I have gout, and I know dehydration is a big trigger for that.  Could that be a contributor for this?

I'm also changing my diet to include more things that are thought to be natural anti-inflammatories. In general, I'm trying to eat more fruits and vegetables, including cherries.

Lots of stretching is also essential.

I set out for my run on Saturday morning, with my legs aching and a heavy heart.  I felt like this run was really important.  If I felt ok, I could go on.  If I felt badly, then it was another data point that pointed back to square one.  I got a reprieve, when sleet and freezing rain started just as I was about to run.

Chris and I did a lot of work clearing out one of our storage rooms, and then we went out and met some friends for drinks.  I was careful to mix in a few glasses of water, too.

Sunday morning, with my legs feeling better as I left the house I ran four miles with a sore knee and no hint of compartment syndrome.  My feeling of relief was huge, but I know that I shouldn't get too high over a single good run, just like you were probably thinking I was getting too low over 2 bad runs in December.

I'm going to continue the changes I made to diet and alcohol consumption, and I also want to implement the following:

1. Make sure I don't just sit around all day.  This is tough because I sit around all day at work.  I need to make sure that in the morning or at lunch, I make some time to walk on the treadmill or go for a short run.  I felt like being up and around on Saturday helped my legs feel better than they had that morning.

2. More commitment to core and leg strength training.  I'm good at doing this when I'm in PT, and I'm good at doing some exercises (squats and calf raises) after I run.  I think I was not doing enough, though.  Not only did I in general run less in December, with so much holiday stuff going on, but that also meant I was missing out on strength training.  I'm sure with running less, and doing these exercises less, my legs got weak again.

3. Make sure I get my mid-week runs in, even if they're only 2 miles.  In December, I basically ran once a week.  That's not a recipe for success.  I need to make sure I get them in the mornings, because running at lunch is a non-starter.  There are many times (today being one) where I planned to run at lunch and then got too busy to take that full hour for stretching, driving to where I run (my house is just not a safe running area), running, doing post-run stretching, and coming back.  I should have just gone up and run at the park closer to home.  It's hilly, and I'm not ready for that now, but closer distance to my house will make this easier to do in the morning or (maybe) at lunch.

Hopefully, I can manage this because I really don't like the idea that I had surgery for nothing or the thoughts of throwing more surgery at this particular injury or losing another year of long runs. 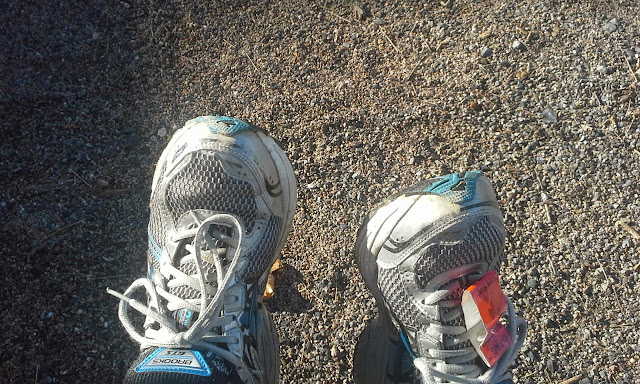 In this picture, I'm sitting on a park bench and trying to raise my toes to stretch.  The left foot doesn't have the same raise of motion when the symptoms are active.
Posted by Brian at 10:31 AM