I used to run a 27-minute 5k pretty easily.  My best was under 23 minutes, and I only got there once, but I got close a few other times.  But usually I was in the mid-20s and could bring it in under 30 minutes with a just under 9 minute-mile pace.  In a longer race or my training runs, I was usually still a little under 10-minute miles.  Except the marathon.  Let's never speak of the marathon.

These days, not so much.  I've been closer to 12-minute miles for most of my latest comeback attempt, which really started in earnest at the end of March.  I'd had some good running in January, and really didn't get out at all in February.

I've been happy my last two times out to break a sub-36 minute 5k, keeping it under 12 minute miles.  I was even happier with this on Saturday.  Check that negative split! 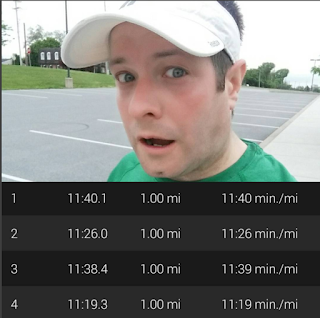 I don't care if I'm never again as fast as I was in my 30s.  I would like to get my 5K back under 30 minutes, and I would like to be able to finish a half in under 2:30, from which I'm in striking distance in terms of pace.

Distance is another thing.  I haven't run more than 4 miles since last May and I have only run 4 miles 3x this year, one of which was yesterday and the other two times in January.

As the weather warms up, I want to focus most on maintaining consistency, getting out there and running 3-4 miles 3-4 times a week, even though I hate every step.  If I can mix in an occasional 5 miler, that'll put me in good shape to add distance in the fall.
Posted by Brian at 8:07 AM

Email ThisBlogThis!Share to TwitterShare to FacebookShare to Pinterest
Labels: running