I've Been to Hill and Back Again

I woke up a little before 6am, and my Vivoactive said it was 72 degrees.  I figuree that was the "coolest" weather I'm likely to have the rest of the weekend, and well, I don't always have motivation, so when I do, I need to make sure I get my butt there.

The sun was already bright by the time I got over to Northeastern.  I got out of my car.  It felt warm already, and I was dreading it.  I decided to make things worse.  I've been running the same 3.1 miles route since April, focusing more on consistency than speed or distance, and running the same route over and over really lets me have a good comparison from run to run.  Was I faster than usual?  How did I feel compared to other days?  It makes it nice when there's a day like Thursday, where I can say "Ok, I felt worse than usual, but it was because I was about 30 seconds/mile faster than usual".

Well, today I decided to mix it up.  I have a hilly 3-mile loop that starts at Northeastern High School in Manchester, goes down Maple Street & Walnut Street into Mt. Wolf, climbs up to Six Street, cuts over to Chestnut, which provides a steep downhill followed by a en even steeper uphill that takes me back to board road and my start.  It's brutal, and I'm disappointed by how non-hilly it looks on this GarminConnect elevation map.  (It looks much more impressive on my phone, but I left my phone downstairs and then I'd have to transfer things over to my computer and it's a pain). 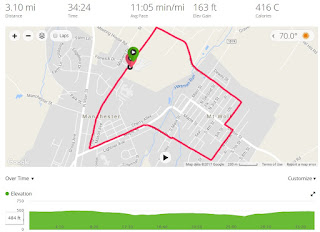 Here's my normal route (my run from yesterday) for comparison: 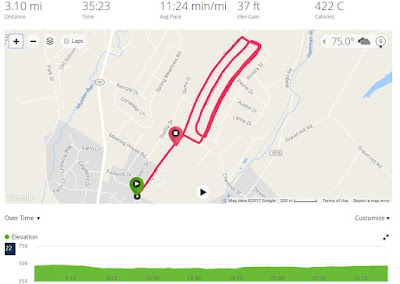 Anyway, it hurt, but I'm really happy with how it went.  I had a faster pace than yesterday, even on a more difficult route.  It was a few degrees cooler and less humid, but with the sun beating down on me, I still felt like I was boiling.

While my wife and I were training for the Shamrock Half in 2016, we'd run our long run either Friday night or Saturday morning, and then I'd run this on Sunday, and I found it to be a good test of strength.  I think I'll start mixing it in again.  As Frank Shorter says, "Hills are speedwork in disguise."