What do I say about these races?

I'll be honest, like most of my running stories, this is one of those things that seems like a good idea at the time.  I'd just had another great time at Shamrock.  I'd signed up for the marathon.  I'd been running more than I'd been running in years.

Summer.  The season I used to look forward to has become the bane of my running existence.  This was not the hottest summer.  I could usually find temperatures in the 60s or low 70s.  With 100% humidity.  At 7am.  It sucked.  It was gross.  I'm not as skinny as or as tough (those two concepts are unrelated, but they both relate to my tolerance of heat) as I used to be, and I suffered.  Due to weather, bad luck, and just an uncommonly busy schedule in September, I just didn't nail the long runs like I usually do.  My longest training run was 8 miles, on the first cool Saturday of the year, one week before the hilliest half marathon I would ever run. (Creepy Foreshadowing Music).

The Runner's World Half & Festival seems to be the official name of the event, and they have a great variety of races over the weekend:


For those of you into multi-race challenge events, they've got a good thing going here.  To do all four is called the Grand Slam. You get a quarter-zip pullover for it.  To do the 5K, 10K, and Half is the Hat Trick.  Brilliantly, you get a hat.  To do the 5K and 10K is the five and dime, and you get socks.

Doing the 5K and Half is a big fat tub of nothing, and that's exactly what I did.


5K
Your HQ for the Festival is the SteelStacks compound in Bethlehem, PA, not far from Runner's World HQ in Emmaus.  (Hopefully that remains now that it's been purchased by Hearst.)  This provides a scenic and somewhat convenient center of events.  Scenic because they've...well, not renovated but used the decaying buildings of the old steel mill and turned them into a haunting and strangely beautiful backdrop to a multi-purpose event space.  Can you tell I'm a marketing writer?  No. Ok, carry on, then.

But anyway, all 3 of the road races start at the SteelStacks and head eastward from SteelStacks and head toward the Fahey Bridge, and they all end with a long loop around the ArtsQuest/SteelStacks compound via Sands Boulevard (adjacent to the local casino resort) with a finish in the center of SteelStacks.  The main difference in the races is how much time you spend north of the Lehigh River.

The 5K is not flat, but its biggest hill is still within the first mile, a steep climb right after the Fahey Bridge and then an equally steep descent.  It was here that I got my best advice of the weekend, a father saying to his probably 10ish old son, "We're going to go downhill now.  Don't try to speed up, just let gravity do the work and rest.".  Although the advice wasn't meant for me, I tried to follow it.

My goal was to take this race relatively easy, since I knew I was undertrained for both the distance and hills the following day.  With that in mind, I tried to not to push myself. I succeeded, finishing in 35:36, which is quite a bit slower than my normal 5K training run finish times.  That was a little disappointing, given that I'm most often at 32 or 33:something, and it was a cool day, which usually makes me faster (#fasterinthecold).  Of greater concern was how tired my legs felt.

I don't have anything bad to say about the race itself.  The scenery is interesting and the early location of its tough make this a course anyone can enjoy.  It wasn't my finest hour as a runner, but I was happy with it. 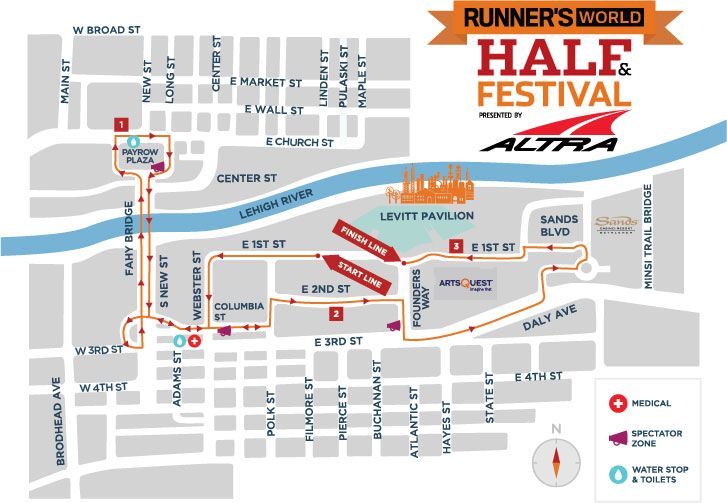 Half Marathon
I'm going to skip ahead of some things that I'll come back to later and just say that I woke up the next morning at the Overlook Hotel in complete dread.  I did not want to run the half.  I really, seriously contemplated telling my wife "Let's go home.  I'm not ready for this.  This is stupid.".  I've never been this scared before a half, even my first.  I was really having trouble getting my nerves and stomach to calm down that morning.

But, once the race started, I felt ok.  Stronger than I had during the 5K, and that strength just stayed with me longer than I had any right to expect it to.  I paced myself smartly and ran a careful race, trudging up the uphills and speeding up on the flats and downhills, and I felt great up until about the 10K mark, good up to about 8, struggling till 10, and then basically a mass of gelatinous goo for most of the last 3.1, the exception being a long, steep downhill just before mile 11.

I'm still about the same 40-minutes slower than my old PRs that I was at Shamrock, this was one of those unexpectedly very good races that I magically pull out of my you-know-where occasionally.  I'd heard all weekend that this course was hilly.  And it was very hilly.  But I ran 10 miles of it before I needed to start mixing in increasing amount of walking. I credit 3 things:

1. The cold:  I love running in the cold.  There's got to be some formula that converts hot miles into cold miles.   If there's not, I just invented it.  Let's call it "Brian's First Law of Thermodynamics", which states that every hot, humid mile equals 2 cold miles.  MH=2(MC).  You'll be quizzed later.  This was a raw, windy morning in the low 40s. The kind of weather that makes running blissful and standing waiting to run miserable.  I'm the idiot that used to stand in the Orange corral at the Philly half in a tank top, shorts, and light gloves in 35 degrees.  Now, at least I wear a light crumple-up jacket, which I wore till mile 4.

2.  The free advice I got from the dad.  Some of these hills were killers.  But, what goes up, must come down.  I've never ran a race that had the long, steep downhills like this one did, where I could rest and let gravity do the work.  As tough as the uphills were, I think these downhills let me run more of the race then I might have been able to on a completely flat course.

3. Crowd support and Bethlehem. Bethlehem is a beautiful old town, and this race is a great way to see its historic downtown as well as a lot of its neighborhoods, and people came out to cheer in droves. Both things distract from how most of the race seems to be uphill.

I'd like to especially give a shout-out to the Sub 30 Club, a group of people dedicated to supporting each other through their running adventures.  To make a long story short, the Sub 30 Club started as an online support group with RW writer Ted Spiker, who was attempting to train his way to sub-30 minute 5k.  It's become much more than that, a tight fraternity of runners who cheer for each other along the course, encourage each other in training, and make sure that no one finishes last alone and no one feels alone on the course or at the event.  There's always volunteers left to run in with other club members, including Jeff, who pushed out-of-breath me to a faster finish.  My wife's been a member of the club virtually for a couple years, and I just joined recently.  Check it out on Facebook. You'll be glad you did.  We're huge introverts and they made us feel very welcome.

I hit the 10-mile mark right at two hours.  I knew if I kept my walking pace up I should be good for under 2:45, but since there were some downhills, I was hoping I could beat my time from Shamrock.  I just didn't have quite enough in the tank, and came in at 2:40:03, which I am very, very happy with.  As I checked my results on line, my 1:59:33 from Philly in 2010 shows up as "other races".  Like this, that was a better-than-expected result that seemed to come from nowhere.  I'm equally proud of and happy with both. 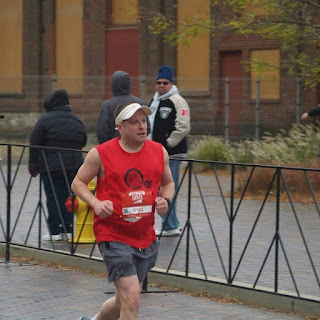 Throughout the race, I amused myself by thinking of the really cocky things I was going to say to Chris when I finished.  Should I quote my favorite speech from Lord of the Rings?  Butcher some Hamilton lyrics?  Drop some mad rhymes?  In the end, I was too incoherent to do anything.  I tried to make a funny funny face for the finish line cameras, and my chin muscles cramped up.  Oops. 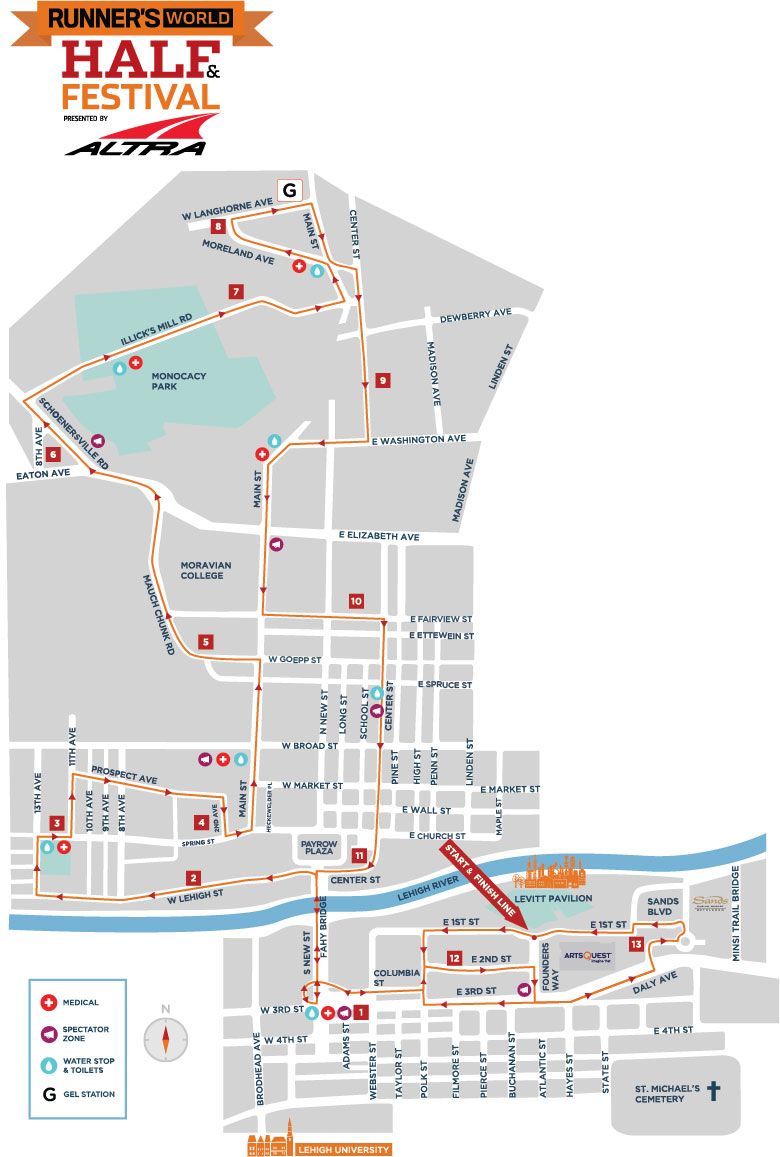 Event
I have mixed feelings about the event.  On the place side, the races are great.  What else would you expect from Runner's World?  The course management is phenomenal, adequate water and aid stations, great volunteers, and excellent crowd support.

What's negative is just that this is a race you have to drive to, and that makes it a little inconvenient.  I'm comparing it to Shamrock, Philly, AC (which I didn't run), Baltimore, Wildwood, and Love Run, all of which we stayed locally and can walk to the race.  We stayed a little outside Bethlehem, since there was no room at the inn (wakka wakka wakka), but the start isn't walkable from most hotels in the area.

I also expected more from the expo.  It's not the biggest race or the biggest town, but Runner's World IS running. I was hoping to be able to both load up on Runner's World swag and buy the things I'd forgotten (Sports beans in my case).  The pasta dinner was fun and the food was good, but I'd have liked to hear more from the RW staff or perhaps a VIP runner.  I've heard that Bart Yasso (who is as nice as everyone says he is) has brought the house down in previous years.

That doesn't change the fact that is race series is fun.  The camraderie of runners makes it fun.  The restaurants and breweries of Bethlehem (Fegley's Steelworkers' Oatmeal Stout, trust me on this) make it fun.  The Sub-30 Club makes it fun.  We probably won't do this every year, but this is a race series I'll definitely be willing to come back to.