Background
My wife is a member of Half Fanatics, a ridiculous group that, along with its sister organization Marathon Maniacs, encourages people to run long races all the damn time and provides a network of support for members at those races.

I wanted to join it, too.

The "easiest" ways to join the lowest level of Half Fanatics is to run two half-marathons in 16 days or three half marathons in 90 days.  They have to be official races, not me running around Manchester by myself, so logistically this can be a little challenging when you live in the middle of nowhere.  My wife had previously qualified a few years ago (I'm too lazy to look it up) by running Shamrock and then Love Run in Philadelphia a week later.  The two races don't always line up like this, since the Love Run is sometimes moved to avoid Easter, but this year they did.  Well, ok.  Sign me up.

Pre-Race
The perfectly cromulent race expo was held at the Pennsylvania Convention Center.  You get a decent amount of stuff for this race:  A tech shirt, a commemorative mug...and well, I guess that's it. But what more do you expect? But it was nice expo, with a decent selection of vendors and representation of other races, and the opportunity to win free prizes from CGI Racing, the event's organizer.  My wife won last year's mug, and I won a pair of Love Run gloves.  Score.

The highlight of the expo for me was saying hi to Bart Yasso, "the Mayor of Running", who was representing the Philadelphia Marathon/Half Marathon/Rothman 8k, Philly's big fall running event.  I've briefly met Bart, the former Chief Running Officer of Runner's World, before and he's a nice guy with lots of great running stories, but I'm an awkward introvert who didn't really know what to say.  This time, Bart saw immediately that I'd run Shamrock the week before (since I was wearing all my stuff to prove I was savvy half marathon veteran), as he also had, and we had a nice conversation for a few minutes about that while he was supposed to be signing people up for Philly, before he graciously posed for a picture with me.  Thanks, Bart! 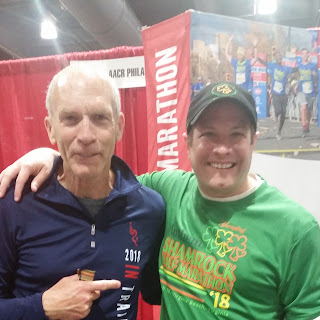 After the expo, my wife and I went to dinner at Pizzeria Vetri, a slightly fancy pizza place near Rittenhouse Square (Does anyone else watch "Timeless" and now think of "Rittenhouse" as evil?).  We were tired, so we stopped for one drink at the hotel bar and went back to the room to lay our stuff out.

As I mentioned in my previous post, when I registered for this in the fall, I'd had the foresight to put "Dallas Sucks" on my bib, perfect since I was running in my Eagles shirt and the Eagles had actually won the Superbowl for once.  This was already the best race ever...until the race part started. 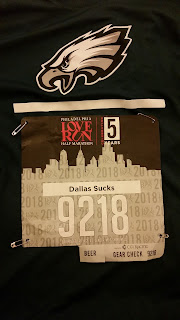 Race Day
Let's just get this out of the way.  It was fucking cold.  It was overcast and windy and even when our corral got underway at about 8:00 a.m. (half an hour after gun time), I never warmed up. 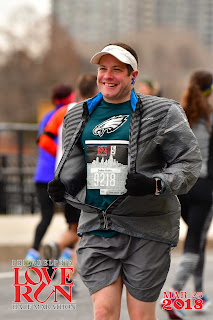 The course itself is similar to the Philly Half, except it doesn't go as far east into Old City but then makes up for it by going farther west into Fairmount Park.  Like the Philly Half, which to be fair I haven't run since 2010, I enjoyed the Center City part of the race more than the park part of the race, even though my Garmin was frustratingly useless among the tall buildings.  What makes this race frustrating once you get out into the park is, like the Rocky Run 10K we ran a few years ago, it's almost all an out and back along MLK except for a detour around Strawberry Mansion.  It's not that Fairmount Park, along the banks of Schuykill, isn't pretty.  It's just that for the whole "out" you're watching everyone going faster cruise to the finish.  Still, the course as a whole is flat and fast, and I think if your goal is to push for a 13.1 PR, this is probably a good option.  We were not gunning for a PR, bringing me to my main criticism of the race.

The race  website states that is has a 3.5 hour time limit.  Futher down, at the bottom of the page, it clarifies that this 3.5 hour time limit starts from gun time -- the start of the race for the fastest participants.  This means that the people in the last corral, who are placed there because we entered the longest projected finishing times, get considerably less time.

The website claims: "We have factored in the time it will take for the last corrals to cross the start line. Please plan your training accordingly."

We got swept off the course before mile ten, told by the police to move to the sidewalk.  Garbage.  We were able to cross a timing mat at mile 10, where we recorded a chip time of 2:38:49. At this point, our projected finishing time was 3:28.  We did end up falling a little bit short of 3:30, so if we had gotten swept much closer to the finish line, this would have been understandable, but it is abundantly clear that the race organizers did not "factor in the time it will take for the last corrals to cross the start line".

To their credit, the finish line was still open when we crossed, and there were still plenty of medals, food, and even a beer tent with Yards Brawler(we've seen no sign of a beer tent on my wife's two previous Love Runs).  It was overall a good, enjoyable event from the expo to the finishing party, but an overly aggressive sweeper puts a huge damper on the race.  If this is standard practice for race managers, it's a shitty one.  I know it makes sense to put the fast people first so they have a clear course.  I myself complain every year that Kelly Shamrock 5K doesn't have a more organized corral or pace sign system.  But it makes just much sense to realize that it's the people in the last corral that need the full time limit much more.

Would I run it again?  Not sure.   The Love Run has a lot of positives: Good expo, decent swag, good merchandise selection, good course (despite my personal gripe about the out and back), finisher party with free beer, good location with lots of things to do and good places to eat. 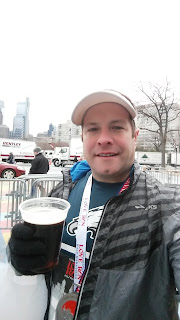 But poor race management potentially outweighs all of that. 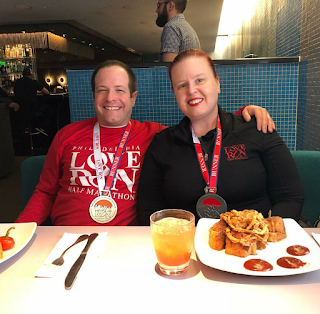 (Cheesesteak Eggrolls at the Continental)
Posted by Brian at 10:02 PM