I guess the Sole of the City 10K, held every April since 2012,  has become an annual tradition for my wife and I.  We've run each race since its inception; in 2012 we did very well, she PR'd (part of a ridiculous string of consecutive PRs of various distances) and I finished just under an hour.  Despite our participation in every Sole of the City 10K, I was very determined before the start of the race that we would never run this one again.  At least I'd picked up our packets the night before, so we didn't have to take stuff back to the car and then walk back to McHenry Row.

You see, the Sole of the City 10K is a logistical nightmare for someone coming from as far as York.  The race begins at the McHenry Row shopping and residential complex in Baltimore's Locust Point neighborhood, near Fort McHenry and the Baltimore cruise terminal. Knowing that parking for this race is a nightmare, because the McHenry Row tenants (understandably) don't want race traffic parked in their garages, Chris and I were determined to get down to the race an hour early.  We tried parking in the Phillips Seafood lot next McHenry row, heading behind the building where the parking attendant indicated.  Already, people were leaving this lot because it was full.  We then parked in an empty space in Phillips front lot, unable to believe our good fortune, only to be told that this was employee parking.  We ended up parking quite a few blocks away in an Under Armour lot.  It honestly wasn't that far, but I was so frustrated at that point, that I determined that this would be our last Sole of the City.

But then the race happened.

The gun went off, and I quickly remembered what I like about this race:  Its unique course around downtown Baltimore.  Don't get me wrong, lots of races run down Key Highway and back, and Key Highway is part of this race, but also gets over to Fells Point and Harbor East, which aren't part of the Kelly Shamrock 5K, or the Kids Peace Orioles Trick or Trot 5K, or (I'm told) the Baltimore Women's Classic.  The course has been changed the past two years from the first two, when it was a pretty flat loop first around Inner Harbor and then through the Federal Hill area, making for a fast first half of the race and a tough second.  Now, I think it is probably equally hilly the whole way through, although the fifth mile is mostly around the Inner Harbor and is quite flat.  But I'm getting ahead of myself.  In sum, think the new course is nice.

And, despite the heat, I felt great.  It was in the mid 60s at race time, which felt very warm to me.  I'd run 6.2 the previous weekend when it was in the 40s.  This was HOT, and I was not prepared for that.  I felt very good through the first three miles, which took us down from McHenry Row; around the Inner Harbor via Key Highway and Pratt Street; then down Wolfe Street toward Fells Point,  and pretty good through mile 4, at which point we had crossed through the Harbor East area and approached the Pier 6 Pavillion.  The heat started to get to me around the 4 mile marker.  The fifth mile, around the Inner Harbor promenade to the Science Center, was the flattest, but without shade and I was dying.  I took one walk break at the fifth mile and another at about 5.5, and made it to the finish in 1:11:04.3, a little over 3 minutes slower than my 6.2 a week before. 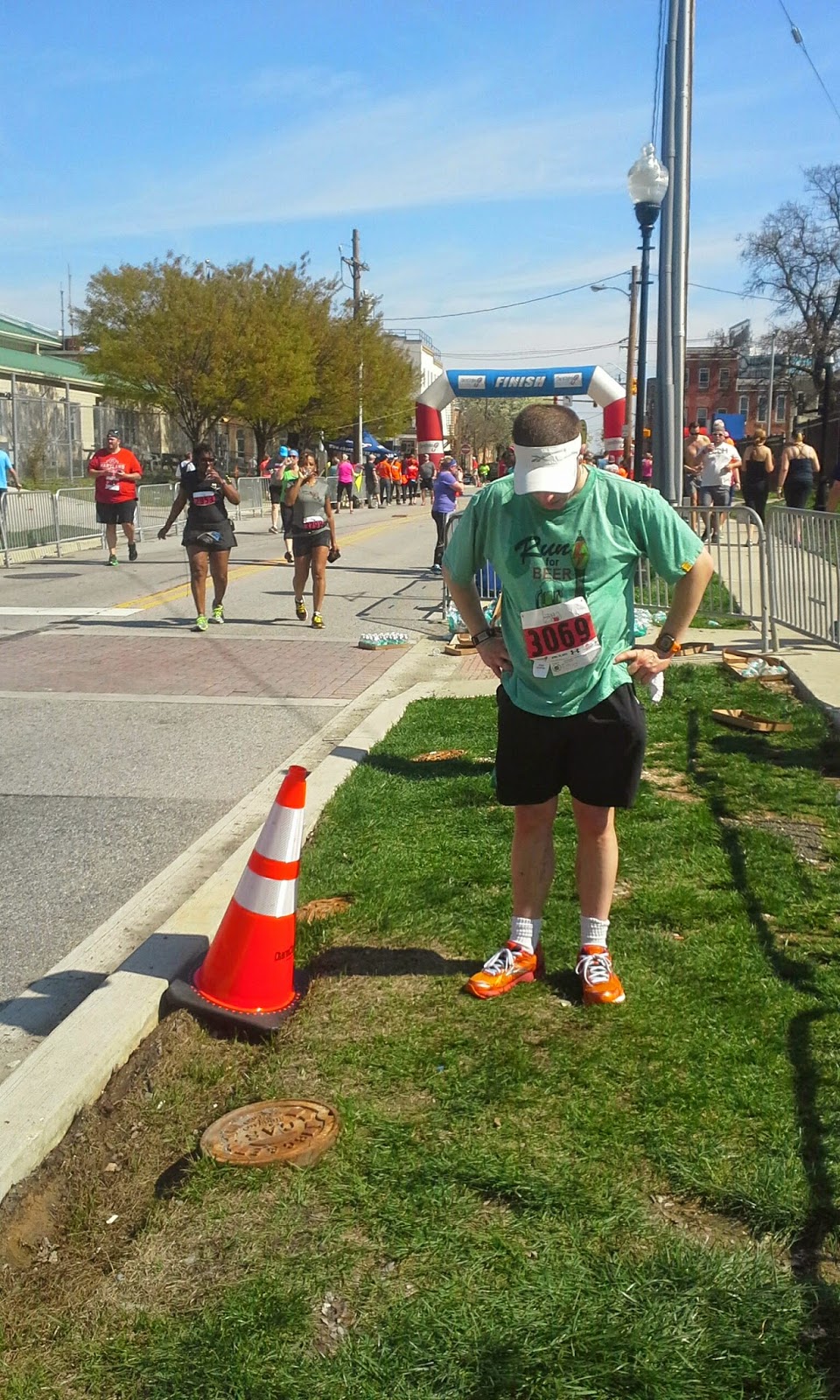 Have I ever mentioned that I don't like running in warm weather?  Note the gross uneven sweat pattern.  Now I'm worried that I have some sort of weird sweating disease.

Considering the heat, I'll take it!  The best part was that my legs felt great, it was the heat and my still getting back in condition that hurt me.  This distance was a stretch for me, so I was really happy with this result.

Race Review
So, despite my frustration with the parking, I think Charm City Run does a very good job with this event every year.  The course is interesting, there are sufficient water stops (mile 2 and mile 4 markers), the finisher celebration is good, and the swag is excellent. 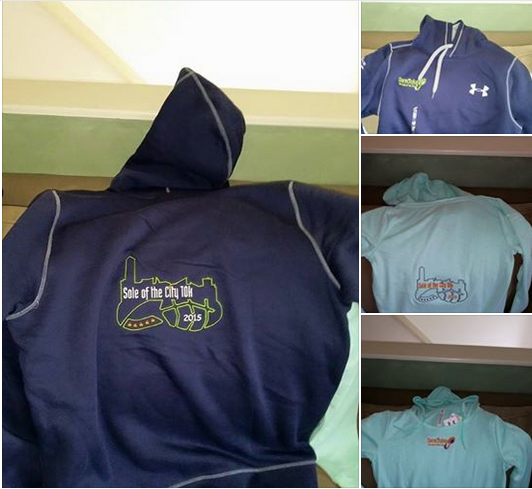 The weather is a crapshoot in Mid-April ,(it was MUCH cooler the next day) but CCR can't do anything about that.

There is one small thing that maybe they can (pun intended) do something about: light beer.  Look, there's no better beer than free beer, but why is it always low-calorie beers that sponsor these races?  I think a lot of runners "run for beer" and I run so that I can try new and exciting beers, with actual flavor. Beer snob though I am, I'd be lying if I didn't admit that the cold Miller Lite tasted damn good on a warm day after a tough race. 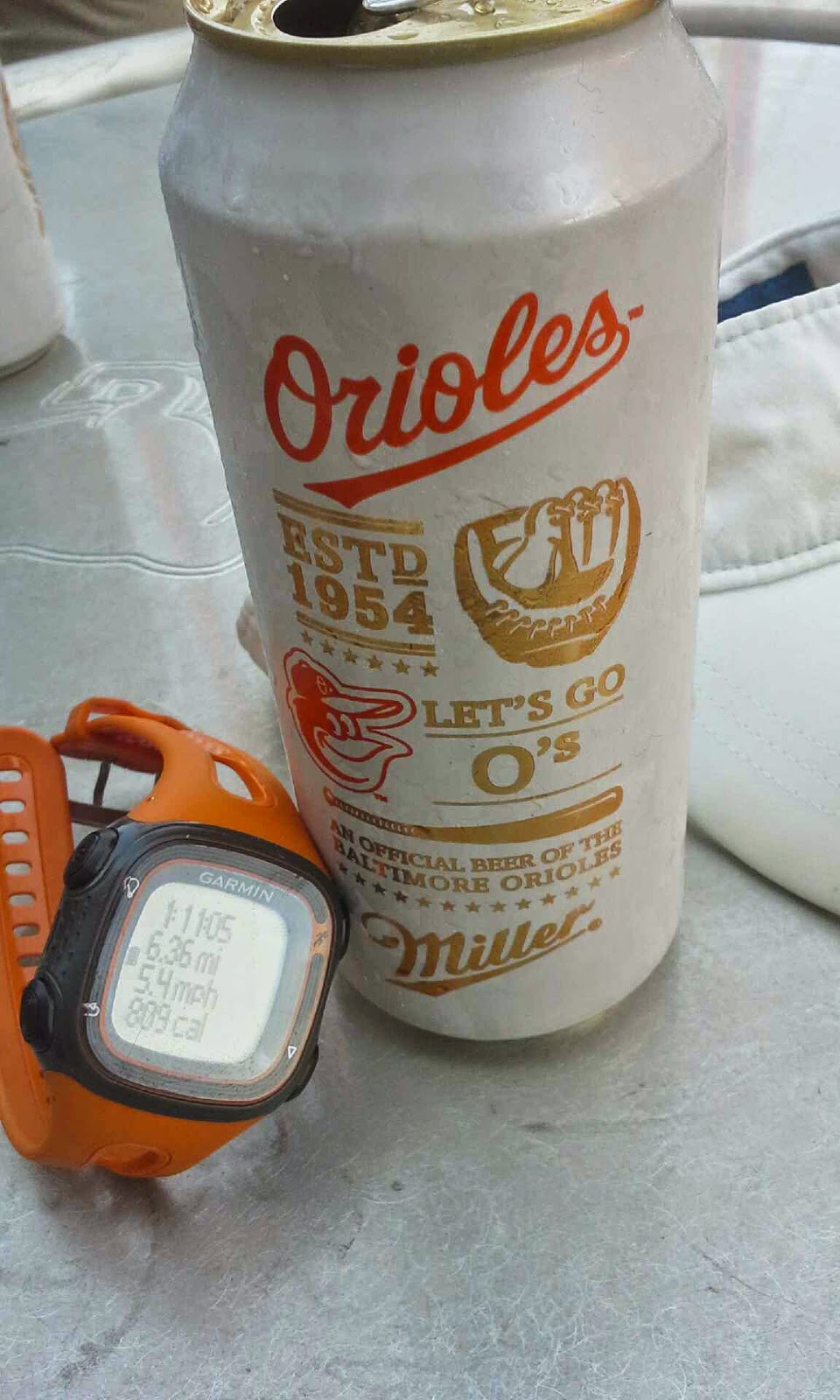 Gotta respect the O's can, but get me something with some hops!

That said, I stand by remarks about parking, and I wonder if this race has outgrown its location.  Baltimore area runners should know that Charm City Run has a store on McHenry Row by now.  Maybe it's time this race moved downtown where there are plenty of garages.

But, even if it doesn't, I'll probably be out on the course running the 5th annual Sole of the City 10K.
Posted by Brian at 11:57 PM

Email ThisBlogThis!Share to TwitterShare to FacebookShare to Pinterest
Labels: Baltimore MD, beer, free beer, i like to complain about things, i suck as a runner, running, sole of city 10K