I'm having trouble putting into words my experiences at the 2015 Wild Half Marathon (but let me write a long, rambling blog post about it, nonetheless), because it's an accomplishment that still feels like a setback.  The accomplishment is that I finished my first half marathon since 2010, marking a significant step forward in my often-derailed comeback; and the setback is how I felt during the race, which I was clearly not as ready for as I had thought that I was.

Pre-race
Chris and I arrived in Wildwood on Friday afternoon, going from our hotel, the Beach Bungalow at the Blue Palms, to the Adventure Pier in time for packet pickup.  We then went for dinner at Capt'n Jack's Island Grille, on the Boardwalk, which featured one of the boardwalk's few liquor licenses, excellent fries, and good burgers and sandwiches.  After dinner, Chris and I retired rather quickly to our room, exhausted from the long travel day and in bed by 9:30.

We slept in till about 10:30 on Saturday, had breakfast (muffins that we had packed to save money) in our room, and then hit the boardwalk.  We did some shopping, picking up a few Christmas ornaments; had a small lunch at Capt'n Jack's again; and played miniature golf (a rare win for Chris) before heading back to our rooms to relax for a while before heading out to an early dinner with some new friends at Little Italy.  After a delicious dinner, Chris and I headed to the Old City Pub for a single pre-race beer, one of our longstanding race traditions, and then back to the room to get our race gear ready and turn in early. 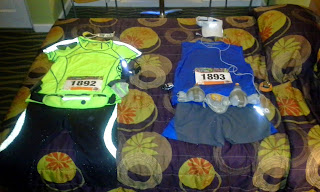 I find the laying out of the gear the night before to be very soothing.
Race Day
Race day dawned warm and extremely humid, consistent with the weather forecasts.  We knew at that time that this race would be a struggle and not much fun. It didn't help that the bed in our room was very firm, and so neither of us had slept especially well and Chris' back (with her two herniated disks) was quite sore. 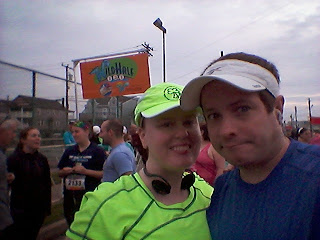 Ready for the race?  Not as much as I thought.
Ready to make dumb pre-race faces?  Of course!

Still, we were as ready as we could be, and we kept to our Jeff Galloway-inspired plan of half-mile run intervals with a minute of walking in between, as the course went south on Ocean Avenue into Wildwood Crest (the southern part of Wildwood) before turning and heading back north on the Wildwood Crest bike path and the entire length of the Wildwood boardwalk.  We were hot, it was disgustingly humid, but we felt relatively ok and were sticking to plan.

At about the four-mile mark, we left the boardwalk and continued in the same direction up JFK Beach Drive (I didn't know any of these street names at the time, I found a map with mile markers here) before making a series of turns that took the course in a more due-northerly direction through North Wildwood.

After the sixth mile, I felt that the course became more difficult, as we crossed a bridge over Gateway Sound and then just after the mile 7 marker another bridge taking us out to Mosquito Island.  It's really called Nummy Island, but I think my description of this swampy landmass is more apt.  During this stretch of the race, we began to struggle more and more with pain:  Chris' back and hips, and my right knee, which was very sore on the outside.  We made the turn shortly before completing 8 miles, and headed back over those bridges, walking the inclines at this point, my right knee and Chris' back and hips hurting badly at this point.

We made it to mile 10, back in North Wildwood, at which point we were walking more than running.  Every mile seemed longer than the next, until we were back on the boardwalk with a little over a mile to go.  At Garfield Ave, we turned off the boardwalk and then made a left on Ocean toward the finish.  The misery had ended.

The positives:  We made it.  The comeback continues.  No compartment syndrome symptoms.

The negatives:  The race just didn't go how we hoped it would. A possibly new injury or recurrence of ITBS.

I was internally kicking myself (with my non-sore leg!) through the last few miles of the race, but after further reflection, I think the positives clearly outweigh the negatives.  We both know that we rushed our training for this race, and I know that while I do my stretching and strength exercises after every run, I have to be more consistent in doing them on my "off" days (my knee injury felt to me like the return of the ITBS that I experienced in 2011.  I know how to manage this), and, to not lose sight of the big picture:  this was the longest distanced I'd completed in almost four years and my longest time out on a course since the Philadelphia Marathon that same year.  As recently as February, I didn't think a half marathon was something I could train for anymore, and it was GREAT to after almost four years to finally be a full participant in a "big" race and not just a spectator.  I am proud of Chris and myself for pushing through pain, in conditions we both despise running in, to finish the race, and I am thankful for her for pacing me (and putting up with me) during such a long race in which I didn't feel good.  Our accomplishment is not taken away by walking more than we wanted or by a sore knee or aching back.

But, I can see that my 10-miler of two weeks ago gave me confidence that was not warranted.  I was not prepared to run a long distance in such hot, humid conditions, and it showed.  I need to train more methodically and train in the heat, I need to lose weight, and I need to get in more l0+ mile runs to determine whether my knee is ok.  My plan going forward is to take it a bit easy with running the next few weeks, which are insanely busy, but to try to get at least one double-digit distance run in during each of the next 5 months with shorter runs on weekdays, whether or not I actually do a half marathon in the Fall.  I think that if I can do this and the legs are feeling good, that this would prepare me to train up to make an attempt at the Shamrock Marathon in March 2016, and that if the legs don't feel good, it would help me to figure out if the current knee issue is really a problem, and/or if compartment syndrome is truly addressed.  For what it's worth, my knee felt dramatically better the next day.

My quest for a revenge marathon took a significant step forward with this finish, but there is still a long way to go. 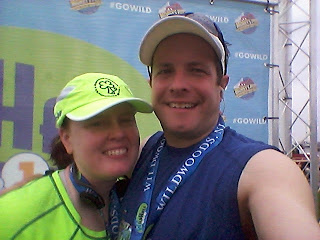 Despite a challenging race, the comeback continues!

Race Review.
I'm not sure if I would run this one again, just because of the likelihood of having to run it in the warm, humid conditions that I despise.  That said, I think Morey's Piers, CGI Racing, and the Wildwood Community did a great job with this event.  The course was clearly marked; the boardwalk was at least partially closed to pedestrians, giving runners a clear path; there were ample water stations with unfailingly friendly volunteers; and the experience at the finish line was very positive (no running out of medals or food, beer garden still open).  Wildwood is a fun destination and the race entry, which includes admission to the Morey's Piers amusement parks, is a good value. I'm sure this event was established as a way to introduce more people to the Wildwood area and all the fun it has to offer.   It definitely did that, and I will have to write in more detail in another post about the fun places we found to eat. Everything that the organizers could control, they did an excellent job with.  I likely would have had a much more positive experience in the race itself if I had been in the condition I was in 2011, when I ran longer distances in warm, humid conditions several times a month.  That's not in any way the race organizers' fault, of course!

If I could change one thing, I would add an expo or some merchandise.  This was my first "big race" since 2011, and I would have liked to have been able to buy a hat or windbreaker.  A friend said that there had been a small expo in a previous year, and theorized there was none this year because another organization had rented the convention center.  For the record, no expo was promised in ANY of the promotional materials or the event's website.  I'd probably also move the event to April, when cooler weather is a possibility, but in this case that would put this event up against several other big regional races and would mean, I suspect, that businesses on the boardwalk would be almost completely closed.  Again, I don't want my own personal weather bias to detract from my feelings that this was a very well-organized, well-run event.
Posted by Brian at 2:42 PM