Race Report: 2011 Preakness 5K, or "The Adventures of Detailed Wednesday"

Today was the first leg of my first ever double-race weekend, the Preakness 5K. Somehow, Chris and I had never heard of it, which is a shame because it was quite fun.

The race was about an hour and 15 minutes from our house। We left in plenty of time, but feared we wouldn't make it because of some mysterious traffic problem just minutes away from Pimlico Racetrack. However, we arrived in time get our numbers and choose how many layers to wear on this cool, rainy morning. The first of many fun things about this race was that, being a horserace-themed race, every runner got a horse-racing type pattern on his/her bib, along with a randomly generated horse name. I was hoping for "Seabiscuit", but instead got "Detailed Wednesday." Really? Detailed Wednesday? That doesn't make any sense. 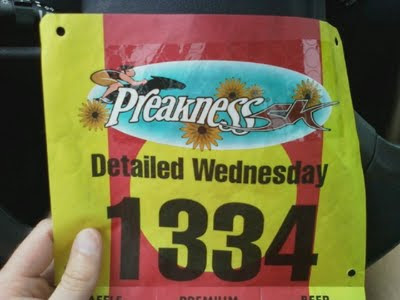 The next fun thing about this race was that we ran through actual, authentic horse-racing starting gates to begin the race. Chris and I lined up behind the gates, and it this point I made a decision that will likely turn out to be the key strategic error that defines this weekend. I had planned on running either this or Bob Potts in pursuit of a new PR and/or a sub 23-minute 5K (a goal for the year), and since I thought this would be an almost completely flat course and it was a cool morning, I decided that today was the day. I set my Virtual Training Partner on my Garmin to pace myself for 22:59, and off I went at the sound of the gun. 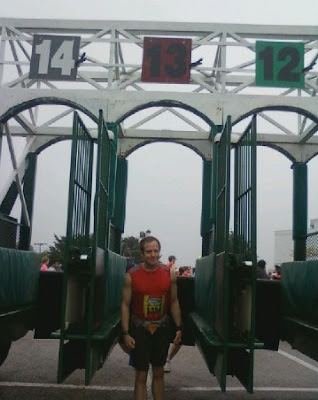 Very early in the race this pace seemed comfortable, and I thought to myself "I got this. I think I can hold this pace." Famous last words. Less than half a mile in, the course veered off the pavement and onto the racetrack itself, which is a 1 and 3/16 mile dirt track that was the equivalent of running on the beach. I heard a runner next to me say "I guess I'm going to re-evaluate my goal pace." Not I. I was still going to push myself for a PR, but over the next grueling (approximately) mile and a half, which was one lap around the course plus bit extra to reach the exit, I found that I was falling farther and farther behind my virtual pal. I was worried about my left ankle, which has some lingering sprain-type injury, as I ran around the sand, but it held up ok. I know enough about horse racing to know that I didn't want to hurt myself while I was on the track. 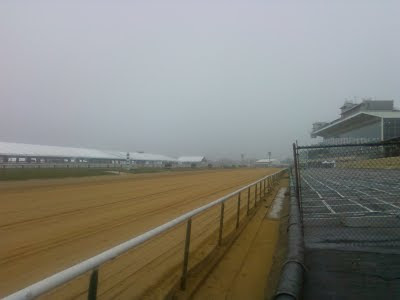 As we left the track, I was about a tenth of a mile behind my pace, where I would remain the rest of the race. Though it was very nice to be off the dirt, I had pushed myself too hard to have enough speed left to make up the time I'd lost. I finished with a 25:04, a pretty good time for me, but well short of the admittedly aggressive goal I'd set. 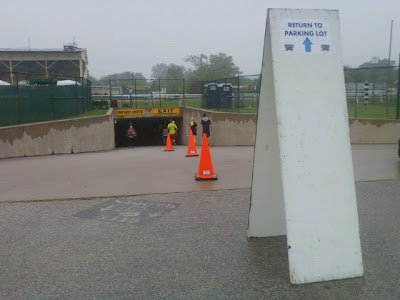 (The course ran through this tunnel, which ran beneath the racetrack, near the end of this course. Not fair!)
After my wife, Materialistic Flack, and I had finished the race, we headed over to the finishers tent for our free beer. Well, actually it was Budweiser, but it was much appreciated after a tough race. 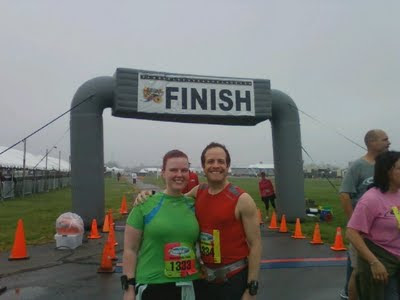 Review
This is a great race that we'd never heard of. Cool race shirts or fleece blankets, fee beer, and good live music. The race itself is an interesting challenge. Like the Fort McHenry Tunnel Run, this is a race that I don't think many people will PR at, but it's a fun opportunity to run at a strange and unique location. I will admit that I was kind of in "tunnel vision" mode, and didn't appreciate the crowd support and the fact that you could see some of the race horses at their stables. There were many little details that made this fun -- the race-inspired bibs, horse names, the announcer calling out people's names as if they were jockeys riding their horses ("Here comes Brian ***** on Detailed Wednesday"), free beer, and a good food selection at the finish make this a race I'd definitely consider for someone in the greater Baltimore area. 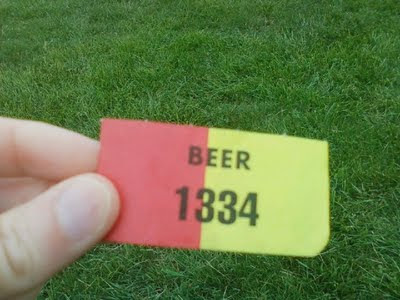 (One of the hallmarks of a good race.) 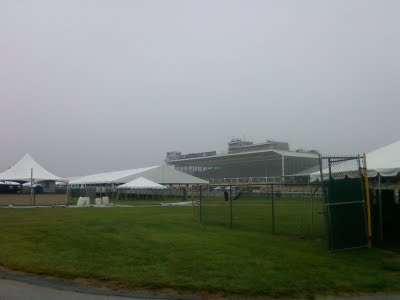 (The infield and grandstand of Pimlico) 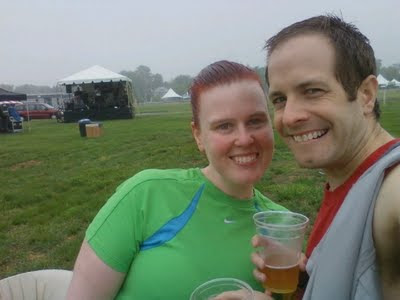 (Materialistic Flack and Detailed Wednesday.)
Overall, it was a good personal effort at a fun race. I didn't come home with flowers around my head, but I didn't get sent to the glue factory, either.
Posted by Brian at 2:34 PM

Email ThisBlogThis!Share to TwitterShare to FacebookShare to Pinterest
Labels: 5K, maryland races, must sign up for races so i have something to write about, preakness 5k, race report