The Supernova Burns Out

It's the end of an era. It's time for new shoes. After another run in which there was just no spring at all in my step right now, and while I don't think my shoes, with 526 miles on them, are the main problem, but every little bit helps, right? (I did run approximately 5 miles today in approximately 48 minutes -- I'd forgotten to charge the Garmin and didn't have my watch.

After two marathons, 5K, 10K, 1-mile, and 5-mile PRs, the age of the Supernova Sequence has passed. According to our salesperson at Charm City Run, where we were picking up our packets for the Kelly St. Patrick's Day 5K, Adidas has discontinued the model, but there were other shoes I could try with similar stability/cushioning. 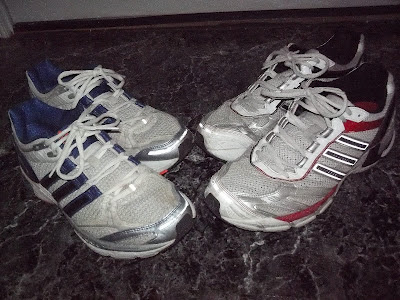 (I've had a pretty good run with the Adidas Supernova Sequence.)
After initially saying that I'd try to order a pair of Supernova Sequences, I reversed course and said I would try some similar models. Our salesperson brought out two models, the Brooks Adrenaline and the Adidas AdiZero Tempo, and said that both should have cushioning and stability to the Sequence. The Tempo felt very light and looked very well ventilated, but the insole was very flat, which I'm used to as a longtime Adidas user. The overall design and the flatness of the sole reminded me of my Sequence 2's. (They actually very much resemble a pair of Glides I bought but returned without wearing when I was first diagnosed with ITBS.)

The Adrenaline actually seemed more similar to my current pairs of Supernova Sequence 4's, but felt like it had more cushioning in the heel and toe than any pair of running shoe I've ever owned.

I'm reluctant to change since I feel that I've had good luck with Adidas (which perhaps is not so true), and so I went with the AdiZero Tempo, since the sole felt so much like what I'm used to. I also thought the ventilation of it would make it a bit cooler in the summer -- which might help offset the extra warmth from the knee-length compression socks that I now have to wear. 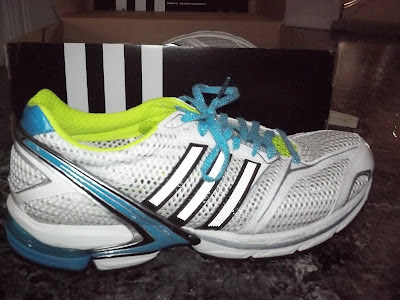 (The winner.)
That said, I am a huge fan of Brooks. My favorite running shorts, shirts, and jacket are all Brooks. If I have bad luck with the AdiZero Tempo, I'll probably give the Adrenalines a try next.