The Trouble With Never: Another Post About the Return of Van Halen

They've still got it.

I've now seen Van Halen four times, and between age, all of the lead singer changes, the contentious history of the band with whomever is their singer at the time, and Eddie Van Halen's health scares, I'm always afraid each tour will be their last and also a little worried about how they'll sound live.

No reason to worry. I went to the Van Halen concert* on Monday at the CoreStates FirstUnion Wachovia Wells Fargo Center in Philadelphia, and from the opening chords of "Unchained", one of my favorites, to final notes of "Jump" two hours later, when David Lee Roth signaled the end of the show by waving a giant checkered flag as massive amounts of ticker tape rained down on the stage, they sounded awesome.

I'd last seen Van Halen on their 2007 reunion tour. Five years later, time has taken a bit of a toll on Roth. He doesn't look as youthful, and maybe has last a just a bit of his vocal range. Most of the time he still sounds fine, like himself, and more importantly, he just is himself. I became a Van Halen fan during the Sammy Hagar years. I like Sammy; I've seen the band with Sammy; I would just as gladly go see them again with Sammy -- but David Lee Roth is a better performer and I just think a VH concert is more fun with him in the lineup. His energy level and stage presence are just unmatched. It sounds like Dave's antics are quite a bit restrained compared to his 1970s and early 80s heyday with Van Halen, but he still puts on a great show.

I'm not even sure what needs to be said about the Van Halen brothers that others haven't said much better than I. They've been great in every show in which I've seen them, but I think Eddie's guitar solo, a 10-minute mix of "Eruption" and "Cathedral", was the longest and best I've ever heard from him in those four concerts. His "jump", after a hip replacement, is just a little hop now, but he looks healthy and sounds great. Eddie's solos are the best thing about seeing the band live, the thing you miss by not seeing them, and he gets most of the attention, but Alex never disappoints, either.

The most obvious difference between the 2007 and 2012 tours is the growth of Wolfgang Van Van Halen. He was technically excellent in 2007, but he didn't yet seem comfortable in his role. He stood in one place, played his part, very softly sang his background vocals. Now, he's a rock star in his own right He's the most mobile of the Van Halens, being 20 years old, and he understandably moved around the stage much more than Eddie. It's a bit funny to see, three aging 1970s rock stars and a normal-looking 20-year old, but it like Wolfgang was having fun out there.

The only bad thing you can say about Wolfgang is only that he's not Michael Anthony -- it's just odd to hear a different voice singing the background vocals on songs I've listened to thousands of times.

I reconnected with an old friend, the person who got me hooked on Van Halen many years ago, to go to the show, and we both felt like interaction between Roth and Wolfgang was interesting. They share a mic quite often, and DLR seems like he's trying to make Wolf laugh, while the young bassist endures Dave's antics with mild amusement. It's easy to speculate that Dave likes Wolf more than the other members of the band -- he's the only Van Halen who hasn't kicked Dave out of Van Halen...yet.

The set list was mostly 1970s and 80s -- Roth (or the band with Roth) refused to play any Hagar-era stuff. They opened with "Unchained", closed with "Jump", and hit the highlights of the era in between, with some selections that I didn't hear on the last Roth tour. I am a fan of the new album, and so I was glad to hear some of the new stuff: "Tattoo", "She's the Woman", "Chinatown", and "The Trouble With Never". Eddie and Alex both had solos, and Dave's solo was to narrate some video about his sheep and cattle-herding dogs. It's a funny story, if only to picture as Dave says, "a bunch of famers and him" -- normal guys and sequenced-pant wearing David Lee Roth -- sitting behind their pickups watching whose dog can herd the best. He then takes his acoustic guitar and sings the beginning of "Ice Cream Man" before the Van Halens return and Dave's guitar is a decoration again.

My only criticism, as a fan of both eras of Van Halen, is that a DLR show ignores a big portion of the band's history, where a lot of hits were made. I understand why Dave doesn't want to sing Hagar stuff, and I've read that Sammy didn't want to sing Roth stuff, but couldn't not sing some of the band's pre-Hagar hits. I wish somehow everyone could get along well enough that they could tour with both Sammy and Dave and we'd get to hear the hits from both eras performed by the original singers. That will never happen and I'm grateful to have gotten the chance to see them with both Dave and Sammy**.

Of course, on several different occasions I never thought I'd see another Van Halen tour, either. 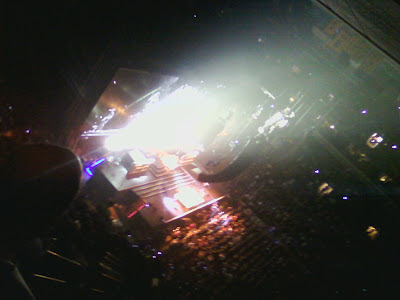 *I also wanted to mention that the opening act, Kool and the Gang, was a lot of fun, but it seemed to not fit anywhere above and I didn't want to rewrite the whole blog post. Our plan was to stop and get some food before the concert, and we knew our timing might not get us there in time for the opening act and were fine with that. I'm glad we saw most of their set. They got everyone in a good, retro mood that was perfect for seeing Van Halen. Kool and the Gang would probably be more fun in a small venue than from the very top row of the CoreStates FirstUnion Wachovia Wells Fargo Center, but it was still an inspired choice for an opening act.

** I've also seen them with Gary Cherone in 1998. Honestly, while Van Halen III, the album they put out with Gary, just doesn't sound like Van Halen to me, I thought he did a good job performing in concert with the band.