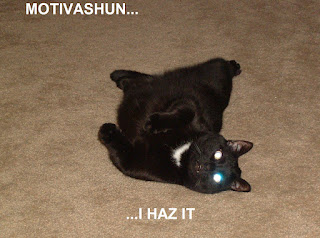 (I saw a cute kitty on the Rail Trail this morning,
but my cel-phone picture didn't save.  So here's Pooka.)

I feel like I'm barely hanging on right now.  I felt the same way before the Philly Marathon, where I'd only get one run in during the week, but then I'd go run 20 miles on Saturday and totally redeem myself (not really...as the marathon results tell!).

Lately I'm in a rut where I just wasn't getting more than 5 miles.  Sure, I got 3 miles in Atlantic City last week, but this past weekend, my Saturday "long run" was right back to 5 miles.

With that in mind, I think I made a little bit of progress this week.  It started off kind of badly, in that I didn't get out on the roads until Wednesday since I was feeling soreness from running HACC Dash way out of my comfort zone and we ran some errands on Tuesday.  I debated between a run Wednesday evening right after work or waiting till later when it might be cooler.
I didn't want to go out after work, since it was around 80 degrees, but I knew that if I waited till later, I would wrapped up in watching the surprisingly competent Orioles and end up not feeling like going out at 10:00.  It turned out to be a wise decision, since they went into extra innings and wrapped up around 12:30.

So I ran, and it was hot, but I felt ok and made myself run 5 miles instead of the 3 that I'd bargained myself down to.  I added some of the big hills that I'd been avoiding, so even though it was 5 miles again, at least it was a tougher 5 miles.

I also realized that soreness from fencing on Friday night was probably having a negative effect on my Saturday morning runs.  So, I went out for my long run this morning and ran 7 miles on the rail trail with no discomfort other than that 7 miles is outside my comfort zone right now.

I'm pretty happy with this, but tying my longest run of the year and having fencing tonight probably doesn't bode well for the Armed Forces Day 5K I'm running on City Island tomorrow.  I have this distinction in my mind of what is a Brooks Adrenaline run vs. an Adidas adiZero Tempo run.  The Brooks run is any run, like today or the Sole of City 10K, where I'm just there...running without an aggressive time goal (and also likely any distance over 7-8 miles regardless of goal).  The Adidas run is HACC Dash or Shamrock 8K...I'm going to PR or die trying.  (Well, that's a little over-dramatic, but one in which I'm really going to run with the goal of being what passes for fast around here.)

I'll try to run a good race, but I think tomorrow is a day for the Brooks Adrenalines.
Posted by Brian at 1:08 PM