I wasn't expecting a very good race at yesterday's YMCA Armed Forces 5K, but I ended up with a better race than I thought I had in me after 7 miles on Friday morning and our most strenuous fencing class on Friday night.

Saturday morning dawned gorgeous, with cool temperatures and bright sunshine over City Island in Harrisburg.  My legs felt good, but as we picked up our packets and took our shirts and bags back to the car, I was tired and still not anticipating one of my better 5Ks.


Still, when the horn went off, I found that I felt great and I took off a little too fast as we started our loop around City Island.  I completed the first mile, most of the way across the Walnut Street Bridge, in almost exactly 8 minutes, and I continued to push myself as we ran northward on the walkway along the Susquehanna.  We ran up an incline to a garden along the path by Front Street, turned around, then ran back the river-walkway toward the Walnut Street Bridge.


Though PR pace was within site, I struggled here.  Since other runners were still on their way to the turnaround point, there was not much room for passing, and when I had an opportunity -- that is, when there was a gap in runner traffic the other way -- I would sprint ahead.  I think this caused my pacing to suffer overall, and though I held pace up the incline back to the bridge, I realized that a PR was unlikely, and I either unconsciously "took my feet off the gas" a bit, or just didn't have a good finishing kick left. 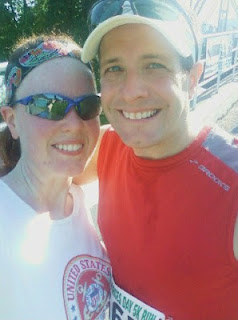 (I ran a good race, and Chris continued her streak of consecutive PRs.)

Race Review
There were some things I really liked about this race and some things I didn't like.  I really enjoyed the loop around City Island.  There were several displays of military vehicles for Armed Forces Day, and it was neat to the see them and I hadn't raced before on the island.  The course is and mostly flat and has a great deal of shade, which on this sunny day was much appreciated.

On the negative side, since much of the course is narrow with runners in both directions, it was difficult to pass; it was a cool morning, but sunny and I still would have expected one water stop (to either take a quick drink or dump on my head); and lastly I thought the start line was not well-marked, so it was tough to tell exactly where to start my watch.


Overall, though it was a fun race on a perfect morning.  I would run it again next year, and I'll know to bring my hydration belt. 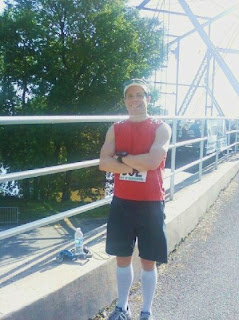 (Posing like a jerk with the Walnut St. Bridge in the background.)
Posted by Brian at 8:00 AM