Signing up for the Spartan Race was definitely a bad idea.  I definitely won't be ready for it, but I am trying to make sure I'm not completely unready.  Chris and I headed over to the local park at lunchtime on Tuesday, since she has Tuesdays off and I, as usual, was working from home.

We ran approximately a half-mile from her car to the playground, where there were some pieces of playground equipment that we hoped would simulate some of the Spartan Race obstacles. 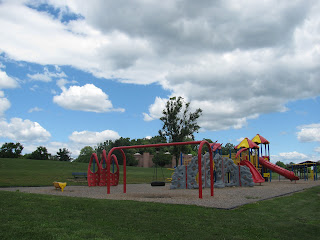 The first thing we tried was the rock climb.  It's really made of plastic...a mini version of a climbing wall.  Getting up it is pretty easy, getting over it to climb down is not so easy, especially because there's the possibility of discomfort to one's...well...you know.  Anyway, I did pretty well at this. 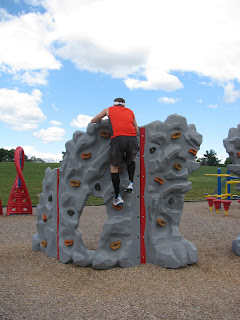 I was also able to make three successful crossings on the monkey bars while we were there, so I hope that bodes well, since I'm sure there will be some similar thing at Spartan Race.  Hopefully it's not too much longer than these, or I'm probably falling in water, mud, fire, spikes, alligators, or whatever. 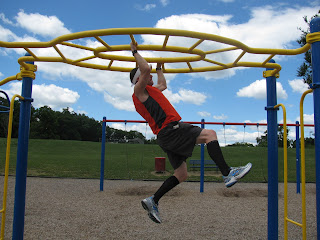 I think the idea of monkey bars it to really brachiate like a monkey, swinging by the arms and shoulders.  I'm not every good at this.  As seen in the picture above, I'm holding most of my weight with my upper arms and just kind of going hand over hand rather than really swinging.  On my third attempt, I tried to swing a little bit more: 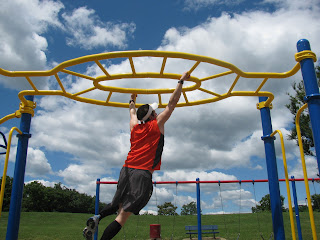 We also tried some of the other obstacles, as well as climbing up the sliding boards (and then sliding down, just for fun!) just kind of running around like idiots that would sign up for an obstacle race. 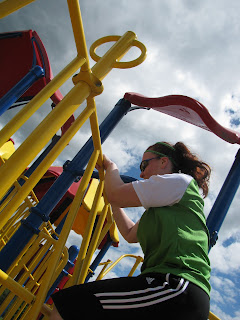 The above obstacle was one we tried several times.  It's challenging because it's curved, you go up a concave side and climb down the convex side, or vice versa, which makes getting over the top a challenge, but we both did well in this.  I think we're probably more likely to encounter a standard rope laddery thing, anyway.

Chris excelled at these, I did not: 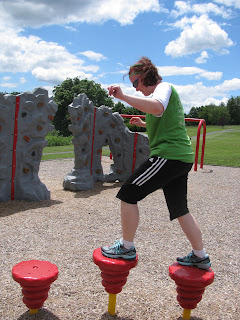 I think the Spartan Race equivalent is just round wooden posts that are driven into the ground.  They'll probably be smaller than these, but some of these bounced up and down and others spun, which usually caused me to fall off.

We'll head back a couple more times to practice.  It was fun and tiring, but I'll probably still fall to my bloody and embarrasing death during the race. 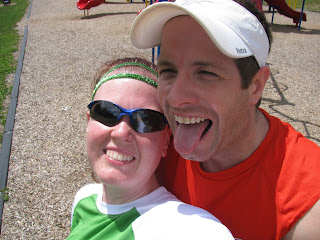 I've done ok in running this week:  a kind of disappointing 5 miles on Tuesday morning when it was cool and beautiful, but I think I was probably still sore from Dreaded Druid Hills.  I'm also going to shelve the Brooks Adrenalines for a few weeks until I get back into a little bit more consistency.  I think they're more comfortable overall than the Adidas, but until I get some strength back, the lightness of the AdiZero Tempos seems to be helping. I'm having all my best runs in them, lately.  I ran six hilly miles on Thursday morning, which I'll probably count as my "long" run for the week because it is supposed to 1000F tomorrow.