Down and Out (Again) in Manchester, PA

It seems like just a few weeks ago that things were looking up.  I had to overcome my own lack of motivation (and I did get out and run again the next day from the "Inertia" entry), but my shins were feeling a lot better.  In my previous blog entry, I described running, slower than usual, but still running, the Shamrock 5K in Baltimore.

Unfortunately, things are really not so good.  Two weekends ago, I went out for a run and had the full-on shinsplint/ankle-swelling/lack-of-motion problem that caused me to shut myself down in October.  I gave myself a few days of rest, and limped through two miles on Thursday before giving up due to calf soreness.  I was suprised, honestly, how well I held up in the 5K. 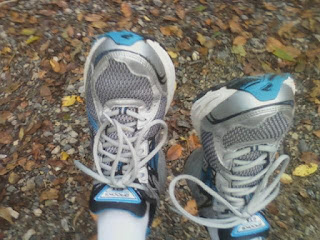 I tried again tonight, and got through only about a mile and a half.  The ankle and shin seem ok, but my calves were really in a lot of pain.  I felt like I would only do more damage if I pressed on, so I dejectedly walked back to my car as I passed by.  My goal had been four miles.  Part of me thinks that I quit too early -- but I don't think there was any way I was getting 4 miles or even three this evening.

Problem:  I'm signed up for an 8K on Saturday.

I'm hoping that because it's flat as a board and because it's a reminder of my glory days, going past the same Neptune statue that I ran by to finish my first marathon (and one of just two that I've run), that I can drag my carcass through the 8K.  I know it's walker friendly if it comes to that and I know Chris won't let me DNF, too...it's just hard to accept that what seems like relatively minor, lingering injuries are setting me back for so long and that I'm going to bomb at a race that I kicked butt at last year.

1. Continue to try to strengthen the ankle and shin muscles, and work on core.  I'd been doing well at this, but we have not had our weekly personal training sessions the past few weeks due to schedule.  That could be a factor, but I have to do more on my own.

2. Lose some goddamn weight.  I was 20 pounds, at least, lighter when I ran my last marathon.  I have to:
a. get to the gym more and not rely on running as my sole source of cardio.
b. EAT LESS  -- No dessert for me until I can run 5 miles.  (I will allow myself dessert on Saturday night if I finish the 8K)

3. Cut back on the race schedule.  When I outlined my race schedule for the year, regular commenter Danny opined that I'd signed up for too many races.  So, revised:

By doing this, it gives me over two months to try get back in shape and decide if I want to tackle Dreaded Druid Hills or not. I'm not signed up for it, so at least I haven't wasted money if I end up skipping it.

I should, in theory, be able to do some of the Movie Madness 5K in Manchester on April 6, and two now-missing 5Ks, HACC Dash and Armed Forces Day 5K in Harrisburg in May if things are going well -- they are all small races that won't fill up.  I had put a half marathon in June in Philadelphia as a possibility, but I don't think that's even worth considering.
I probably would have been better off, and more motivated/less frustrated, if I'd just started completely over from "Couch-to-5K" back in January.  That still might be my best option, but it would probably rule out Sole of the City. 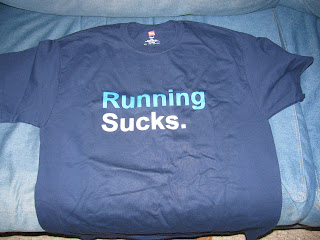 In summary, I know there are a lot worse running injuries and a lot of people who are tougher and more dedicate than me out there.  But still, **** you, shins.
Posted by Brian at 7:30 AM

Email ThisBlogThis!Share to TwitterShare to FacebookShare to Pinterest
Labels: i suck as a runner, injuries, setbacks, shinsplints