Today, I ran my Monday Hill route again.  I felt terrible.  I was breathing heavily almost the entire route, and I needed 3 walk breaks instead of the one I needed last week.  I was writing it off as just "one of those days", when I looked down at my watch and saw that I was finishing a minute faster than my time last week.

So, I'm not sure whether this was a good run or not.  Last week, I lowered my time by a minute from the previous week and felt great.  I think I would have rather felt good with no time change.  I'm certainly still finding my pace again.  I used to be very consistent in my training and be able to tell what pace I was running by level of effort (like the "I'm dying" I put down at my 6:21 mile at Harrisburg in 2011).  Now...I'm not.  Some days I'm faster, some days I'm slower.  I care more about distance than speed, but I have to admit it's frustrating to be finishing 3 miles in the time it used to take to run four.   In my defense, it was 29 degrees F with a wind chill in the single digits.  29F, to me, is long-sleeves or jacket (probably not both), light gloves, visor, ear warmer, and shorts weather.  Single digits is jacket, Under Armour, long pants, hat, gloves.  I dressed for the wind chill, despite my route being mostly sheltered from the wind.  In the bright noon-time sun with little wind, I had way more layers than I needed.  That said, it was brutally cold tonight.  I'm very glad I got my run in during the day.  I love running in the cold, but tonight was way too cold and windy for me.

Anyway, despite not feeling so great on today's run, it caps off another pretty good week of running and fitness.  (Except Wednesday, where I was fitness whole pizza in my mouth!)  In addition to last week's hill run on Monday, I ran 2 on Thursday night with Chris, and then 6 miles in 1:09:50 on Saturday.  That's an 11:36/mile pace, not far off from where I need to be to finish a marathon in 5 hours, whether it be this fall or next spring.  I'm hoping that with more running, more hills, and some speedwork that I'd like to mix in once my endurance is built back up a little more, I'll get a little faster so I have a little cushion should I once again need to walk some of those later miles.

These first two weeks of January have been the best, most consistent stretch of running and working out that I've had since my surgery (mumbles) almosttwoyearsago. 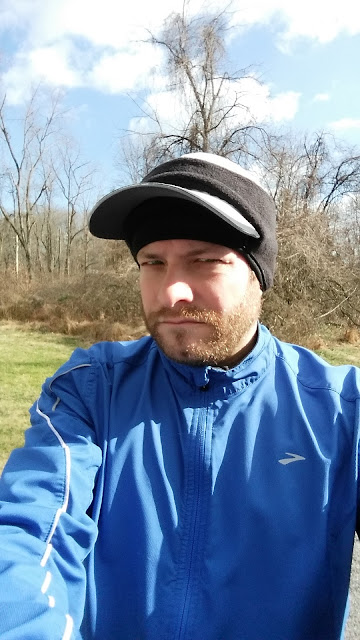 (This goofy fleece headband has a hole for a hat brim.  It was more than I needed today, but is still a neat, low-tech piece of gear that I hadn't used before.  The beard is just for show, it's not thick enough to keep my face warm, yet.)
Posted by Brian at 11:29 PM

Email ThisBlogThis!Share to TwitterShare to FacebookShare to Pinterest
Labels: hills, i suck as a runner, running, training