Hills Suck. Awesome Gloves Do Not.

This was my run last night...and it kicked my butt. 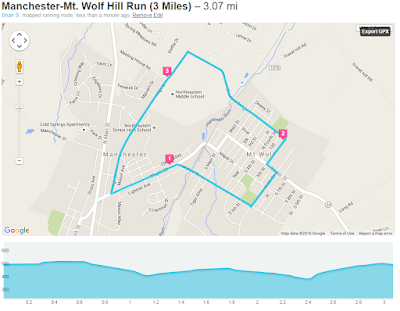 The elevation chart just doesn't do justice to how grueling some of these hills are, particularly the last steep uphill starting at about mile 2.4.  I had been running this route in early summer and doing well, despite the heat, but I'd also been coming off a half marathon, not months of minimal running (not to be confused with minimalist running).

After a mild (to put it mildly) few weeks, this was the first REALLY cold night run in a long time for me..under 20 degrees, wind chill making it feel like the single digits.  I was breathing heavily by the time I hit the half-mile point (Chris and I have been using a Jeff Galloway-inspired walk-run plan, where we walk a minute after every half mile run) and since the next half mile was a steep, fun downhill, I just kept going, and made it up the first big hill, making the turn at the baseball field in Mt. Wolf, and taking my first walk break at 1.5 miles.  I took my scheduled walk break at 2 miles, and then DIED going up the last, steep hill, requiring two walk breaks in that last .6 miles to finish.

My legs are sore today!  I bit off more than I could chew, and I was probably foolish to think that running five miles on Saturday had prepped me for a hill route this tough, but I think I'll run this once a week and hopefully feel myself getting stronger.

I did get to try out an awesome new piece of gear, though.  LED running gloves!  If only they played techno music to go along with the flashing colored lights, it would have been like a 3-mile, hilly dance party.

Email ThisBlogThis!Share to TwitterShare to FacebookShare to Pinterest
Labels: awesome gloves, gloves, hills, i suck as a runner, running