Unexpectedly,
Perfection can be achieved
On a Summer night. 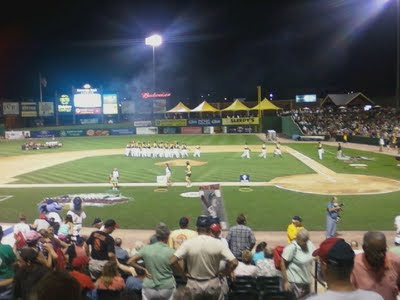 Today the Friday Haiku has nothing to do with running. This week, I wanted to tip a cap (a gross white running visor in this case) to the local independent league baseball team, the York Revolution. Chris and I have been Revs partial season ticket plan holders since the team's inception. We enjoy and it plan to continue attending as long as we can.

It will never be mistaken for the major leagues. That's not an insult -- it just is what it is and going to a Revolution game is quite a bit more fun than going to an Orioles game these days. But, the gap between an Atlantic League game and a "big league" game seems greater the gap between my other favorite local minor league team, the AHL's Hershey Bears (farm team of the Washington Capitals), which I've always felt stacks up very well to an NHL game. (To be fair, though, the Bears are a higher "level" of minor league, have been around forever, are the most storied and successful team in their league and play in a stadium that seats over 10,000.)


But on Wednesday night, the defending Atlantic League Champion Revolution hit the big time, hosting an All-Star Game experience far beyond our expectations. From the first pitch by the Revs' own Corey Thurman to the time we walked out the gate it was perfect. The stadium packed with a record crowd; in-game entertainment by the ZOOperstars, hilarious and somewhat crude inflatable mascots (it's much funnier than it sounds -- "Bear Bonds" has huge inflated muscles and "Centi-Pete Rose" has $'s in his eyes), and the Washington Nationals' racing presidents; the quick, extremely well-played (albeit lopsided) game itself; and the amazing fireworks display afterward all contributed to an evening at the ballpark that in my opinion could not have gone any better.

The Revolution have come a long way since the inaugural season, when construction delayed the opening of Sovereign Bank Stadium by over a month and the Revs were forced to play the whole season in an unfinished ballpark. On Wednesday night, they arrived. 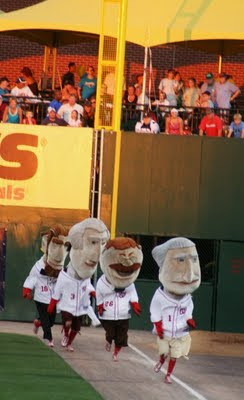 (See! It does have to do with running!
Photo by Christina Stetler Photography)

I've mentioned on here a few times that "some days I've got it and some days I don't", and that one of my favorite things in running is when a great one seems to come out of nowhere. While I was pleasantly surprised by the Revs' awesome All-Star game, today's run was in the works all week. With the heat index in the 100s earlier in the week and temps around 75 with 90% humidity at six in the morning, running was complete drudgery. I obsessively check weather.com, and when I saw lower heat and humidity (lows in the low-to-mid 60s and highs "only" around 90) later in the week, I knew it might be my best chance to get a longer run in. So, I had this morning's run circled on my calendar all week.

It was a gorgeous morning with lower-than-usual humidity and a cool breeze at times. The bright sunshine kicked my butt, but I got in 14 miles in 2:20:54, holding a 10-minute mile pace for 12 miles but fading just a little bit at the end. It's the longest I've run since March, so I'm pretty happy with it, especially in the middle of July when I hate running. In celebration, I leave you with Bonus Haiku:

Marathon, you say?
Fourteen miles is a good start.
Bring it on Philly.