When we first met the Adidas Supernova Sequence II, I was in the throes of IT Band Syndrome, barely able to run 5 miles due to knee pain. Now, almost 7 months, 7 races, and almost 600 miles later, it's well past time to retire them. Since I may run Saturday's long run on the rail trail, which would be new to me, I'll probably hold off on breaking out a new pair of shoes until I'm back in my usual environment.

Saying goodbye is never easy, especially to the shoes that have carried me through my first marathon, my 10K PR, and my mile PR, and helped me recover from injury. So I won't. I'll bump them down to being my casual-wear sneakers, and I'll remember their glory days as I'm walking around the York Galleria. Or not. They're just shoes. I'm sentimental but not that sentimental.

At any rate, I've put more than enough miles on the Sequence IIs to owe them an attempt at a product review. I must warn any readers right away that all my other running shoes have also been Adidas, so I can't adequately compare other brands.

Comfort
I've never had a great first impression of any Adidas shoe that I've tried on. So, why do I keep buying Adidas? Because I trust that once they're broken in a bit and I'm used to them that I'll like them, and since I've had mostly good luck with them, I'm reluctant to switch. My experience has always been that when I try Adidas running shoes on at the store and compare to other brands, they just don't feel as soft and cushion-y. I can't evaluate how well the sole is providing cushioning while I run compared to others, but I just don't think the interior padding of the shoes are as soft.

That said, I've always felt like they fit the best. When I bought the Sequence IIs, I tried shoes from several manufacturers including Brooks, Saucony, and Asics. I tried the Adidas on first, and wasn't impressed. The other pairs all felt like they had more cushion both as I stood and when I jogged on the treadmill. It wasn't until I tried again, with a different shoe on each foot, that I realized that the Sequence felt the most comfortable to run in. Again, I admit that familiarity (similarity to the Glide, my previous shoe) probably played a role in my selection.

Performance
While running, I would again describe the feel of the Sequence II as firm and supportive. would also describe them as feeling heavy compared to the Glide.

I am not as cognizant of having proper form as some runners, but I feel the change in footwear from the more neutral-cushioned Supernova Glide to the more stability-focused Sequence changed me from more of a heel-striker to more of a midfoot striker. A look at the soles of the Sequences shows that this may not be as accurate as I'd thought, but they also have at least 100 more miles on them than is recommended. 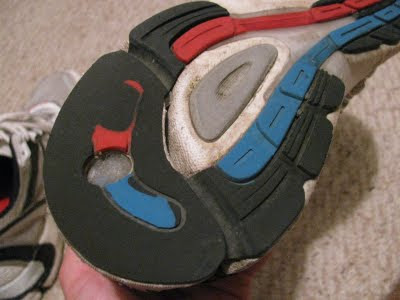 (Maybe I AM heel-striking a bit.)

My orthopedist, PT, and the people at the specialty running store didn't really come to a consensus on how much I was over-pronating, so I don't have strong feeling one way or another as to how well they addressed that issue. I will mention that it was my orthopedist who recommended that I move to a shoe with more stability, and since the inflammation of my IT band subsided around the end of February, I haven't had any more problems with it. It's impossible to say how much the Sequence had to do with that. I suspect the shoes played a role, but that stretching and foam rolling made most of the difference.

I set my 10K and mile PRs in them, but I wouldn't say I feel faster or slower in them compared to any other shoe I've ever owned. Perhaps something lighter would make me feel faster on race day, but I can't deny that the Sequence seems to have been a good all-purpose running shoe for me.

Durability
Excellent. The outside of the shoe, the insole, and the interior cushioning have held up very well over the past 590-odd miles. I can't say as much for the soles, but in their defense I put well over the recommended mileage on them.

I do most of my running on roads and sidewalks, and left the Sequences behind for my Mud Chasers misadventure, so I can't really say how they'd hold up on rougher terrain. 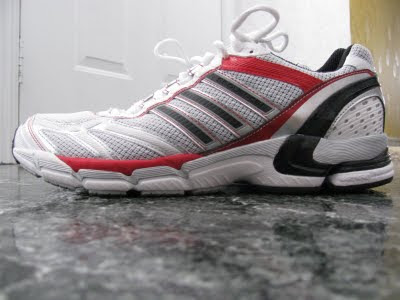 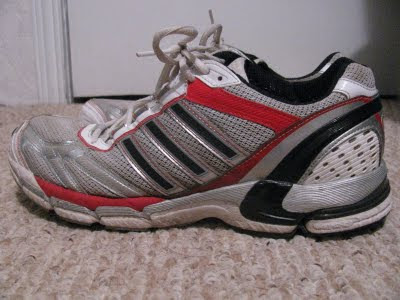 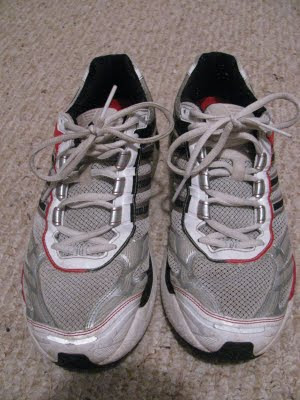 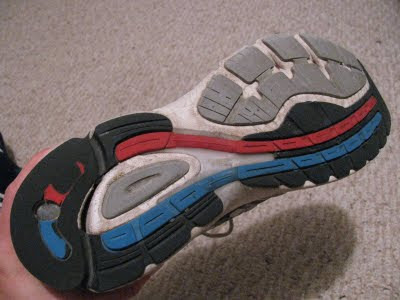 (Still a little bit of tread on the tires -- if you ignore that heel.)
Conclusion
I would absolutely consider buying another pair of Adidas Supernova Sequence. Perhaps I already did. 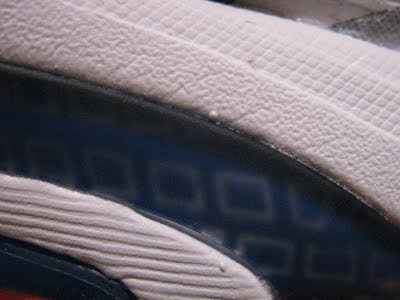 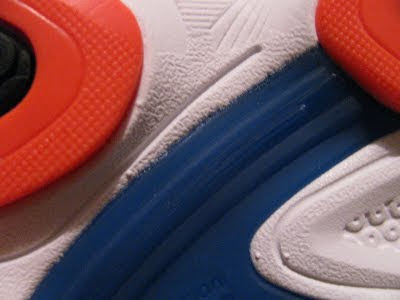 I'd show you more, but that would give me one less thing to blog about next week.
Posted by Brian at 10:00 AM