At the end of August, when a friend and I made the decision to purchase standing-room-only tickets for the Philadelphia Eagles' Sunday Night Football matchup against the despised Dallas Cowboys, it seemed like a great idea. Coming off a division championship and with several pro-bowlers added to the roster, we expected the Eagles to be cruising unstoppably toward a date with destiny.

Instead, they stumbled awkwardly in response to every possible challenge. Their offense, an extremely stoppable force inside the red zone; their defense, an eminently moveable object -- the entire field became the red zone for opposing offenses. With four losses and wins against only the lowly Rams and fast-starting, faster-collapsing Redskins, the Eagles were playing to save their season against the similarly erratic Cowboys, who were coming in confident from a blowout victory over the Rams and and near-upset of the Patriots.

The odds did not seem to favor us. The situation felt far too similar to two other prime-time Eagles vs. Cowboys games that we had attended, in which disappointing Eagles squads lost to the Cowboys with their seasons on the line. On a Monday night in 2005, the Eagles played well and led most of the game, holding on to a 20-14 lead when Donovan McNabb threw an ill-advised interception that was returned down the sideline for a touchdown by Dallas' Roy Williams. The throw was awful, but the decision worse. With the game clock winding down, a punt or even a regular would have given the defense a chance to hold on to win. The Eagles had one last chance: Reggie Brown dropped a perfectly thrown deep ball from Mike McMahon, who was in the game after McNabb was injured during the INT return, and David Akers missed a 60-yard field goal.

In November, 2007, the Cowboys were on their way to a 13-3 regular season (and luckily for me, a disappointing postseason) when they ran over the mediocre Eagles. The score was 35-10 at the end of the third quarter, and I live three hours away; it was the only Eagles game I've ever left early, and I've been to some very bad losses.

After a fun afternoon of tailgating, we entered the stadium and staked out our standing room with a mixture of anticipation and dread. I knew the Eagles could win. But although the Cowboys had also been plagued by inconsistency and errors, it seemed to me that the competent version of the Cowboys were more likely to show up than the well-executing Eagles. 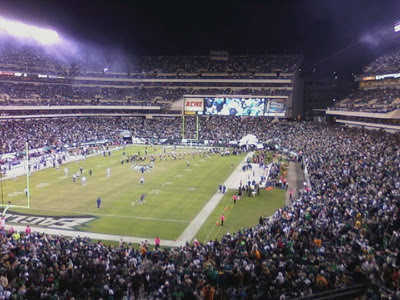 (The view from the cheap seats reasonably-priced stairway)


I couldn't have been more wrong. The Eagles quickly jumped out to a 7-0, force a punt, and scored again. The crowd went wild, the rout was on, and the Eagles never looked back. This is a running blog, and LeSean McCoy ran wild. Every time the Eagles lost yardage, we had complete confidence that McCoy would make up for it on the next play. Michael Vick was decisive and accurate, avoiding the Dallas blitzes with quick releases and quick feet; Brent Celek showed up in a big way; and the Eagles previously porous defense never let Tony Romo and the Cowboys offense get comfortable. The outcome was never in doubt. Instead of leaving this blowout early, I savored every moment of the Eagles 34-7 win.

The vile Cowboys were vanquished, the season saved. I started my car at midnight, made excellent time on my drive home, and didn't get to bed until 3:15am. It was totally worth it.

And the swag was awesome, too. 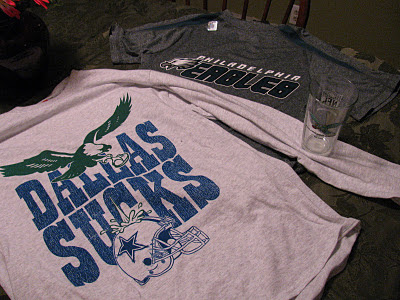 (I try to reinforce a positive performance by buying merchandise after wins.
Two of these items were purchased in the stadium store.
One was purchased from a guy in the parking lot .)

Email ThisBlogThis!Share to TwitterShare to FacebookShare to Pinterest
Labels: football, how I spent my Sunday, off topic, other people running