Catching Up from Down South

Sorry everyone, another boring running-type post. Feel free to scroll ahead for adorable cat pictures.

I'm back. Not all the way back. Not that I was ever really "there", anyway. But, whatever. I'm back. I felt like it really took two weeks after the Philly Marathon-related Debacle before I really felt normal again. But after two well-paced runs, a 7-miler last Thursday and 10 on Saturday, I feel like I'm exactly where I need to be at this point to start training for Shamrock.

Of course, this week is a total mess. Willpower is not the problem, it's just a matter of logistics...which means I guess it is kind of a matter of willpower. I'm on a business trip to lovely Dallas, TX. And let me tell you this, all my sports-related antipathy to Dallas is not just hype -- it really does suck...well, at least the parts I've seen, which have been pretty much limited to the airport, highways and access roads.

The rental car facility was so far from the airport that there really should have been a connecting flight. There's a toll road that I was just magically on with no warning and supposedly drivers are somehow charged automatically and since I told the rental car people that I didn't think I'd be on toll roads now I'm probably going to wind up in a Texas jail. To get anywhere, you have to make these big loops since all the roads are divided. And where is the Jerrydome? I thought you were supposed to be able see it from space.

Anyway...back to my point. I brought all my running gear, and they're having the cold weather that I love, but since my hotel is nestled right off a highway access ramp and without sidewalks anywhere around, I settled on 40 minutes in the treadmill.

Don't get me wrong, it's a very nice treadmill, but it was also 75 degrees in hotel gym! That is why I wanted to run outside! Like I said, it really is a matter of willpower. I could have found a park or residential area, but at 9:30 at night in a completely unfamiliar city, I'll take my 40 treadmill minutes and be content with it.

The real problem, though, is this: 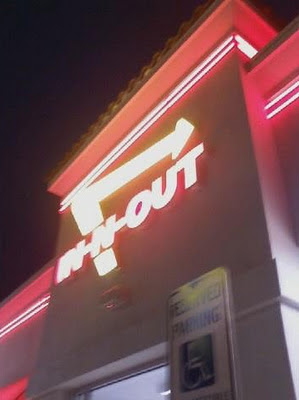 Not just In-n-Out Burger, which is awesome and which we don't have in Pennsylvania, but eating in general. To put it kindly, eating is one of my favorite things. Some people run to lose weight. Some people run because they really, truly intrinsically love it. I run so I can eat more stuff and continue to look relatively the same. But, when I'm on a business trip, I'm less restrained than usual.

It doesn't help that my client, which I'm not going to name, really took excellent care of the people attending the meeting that I'm here for. The attendees at the meeting are provided with a per diem allowance for meals, but when the client provides meals to attendees, it counts them against their allowance at a rate that's more costly than most conference-type food. Because of this, the people in charge wanted to make sure attendees got their money's worth. So, I had an egg sandwich and some fruit for breakfast. Not bad. Lunch? Bad. I mean, good. Delicious chicken in mushroom sauce. I was starving, so I had two lunches. I have no idea why I was so much hungrier than usual, but I still had room for some cookies (and conference cookies are always great!) at mid-afternoon break.

Later in the day, my colleague and I were lured by In-n-Out Burger's neon sign and promise of delicious burgers and fries. It was very good, even though I ordered a cheeseburger and got what I believe to be "Animal Style" by mistake.

I did hit the treadmill tonight, and probably will again on Wednesday. I hope to get to use the hotel's one set of weights tomorrow. But, I probably won't be able to keep myself away from the food.

After my workout, I rewarded myself with chocolate-chip oatmeal cookies, which my wife made me to take along. Did I mention I have the best wife ever? 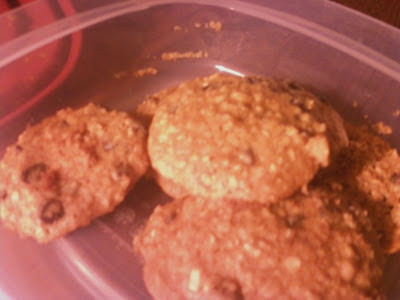 (There were a lot more cookies...but I stress-ate a lot of them after getting to the hotel.)

She helped me out a little, though, replacing the butter with applesauce. Mmm...applesauce.

At any rate, I'm looking forward to getting home to my family and back out on the peaceful roads of Central PA.

And, without further ado, the cuteness: 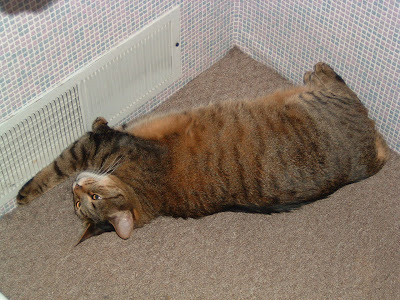 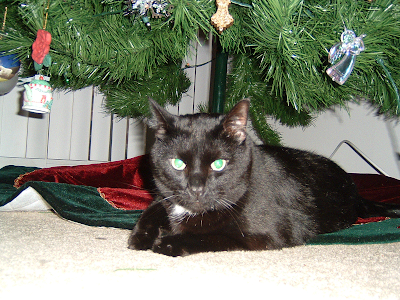 (There's no time like the present to lay under a Christmas tree.)
Posted by Brian at 11:55 PM