The Shadow of the Past

It seems that I'm running out of blogging steam a bit here at the end of the year. Usually, that means I don't have anything to write about. This week, I feel like I have a lot to write about (even if none of it is really super interesting or funny), I just haven't found the time. So, this ends up being kind of a catch-all post for the last week.

Messing with Texas
My last entry was about (among other things) enduring 40 blisteringly hot minutes on the hotel treadmill in Dallas. Unfortunately, despite my grand plans to get two runs and a weight workout in while on my business trip, that treadmill run on Monday night would be the end of my Texas exercising (Texercising?).

I had not, however, seen the last of In-n-Out Burger. I'll leave it to my readers to decide if that's a good or bad thing, but it was just what my colleague and I were in the mood for again after a long day on Tuesday. I planned to work for while and then hit the gym. I hooked up my laptop, sat down on the bed...and woke up four hours later at 12:00am.

Wednesday morning's breakfast was probably the highlight of the whole trip. "Don't mess with Texas?" Well, what about covering the whole state with syrup and eating it? I really didn't think a big waffle was the best breakfast choice before a long day of meetings, but when I saw they were shaped like the state of Texas I knew I had to have one. 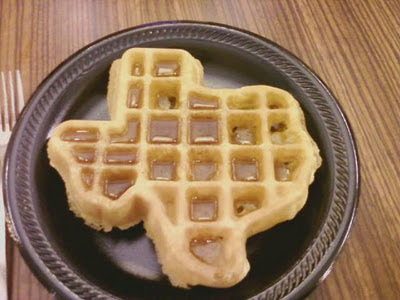 I had one last chance to get a workout in on my business trip on Wednesday evening, but I chose the path of laziness. These three days had been the culmination of two months of very hard work, late nights, and a lot of stress. To see it come to fruition was very rewarding, and now that I had reached a key milestone in the project, I wanted nothing more than a relaxing dinner and a cold beer. And therein was the problem...

My colleague had departed for another meeting while my flight home was not till the next morning. The hotel didn't have a bar, and so I set the GPS to find restaurants. The trouble is that I was staying in a suburban/business-park type part of Dallas, so I couldn't just walk outside and find a place, so I couldn't really see what I was getting into. The first place looked much fancier than I was prepared to deal with, and the second turned out to be an oyster house. Yes, in Texas. I lost my resolve to sit by myself at a chain-restaurant type place, which did abound, and ended up with Jack-in-the-Box take-out. I stopped at a convenience store to see if I could get a beer, and they (predictably) had only six-packs or 40s, either of which would have been a terrible since I was leaving for the airport at 5:00am. At least my sandwich was really good.

On the Road Again
It was great to be home, but it seems like the trip has taken its toll and that I'm still recovering. I went to the rail trail on Saturday for the first time since my last 20-miler in November. I didn't really have a strict mileage or time goal -- I was just going to run from Hanover Junction to Brillhart Station and back, which is between 12 and 13 miles. I started feeling really, really tired at mile 3, and thought about heading back. I bargained with myself that I would turn around at 5 miles, since 10 would have equaled the previous week's run. Unfortunately, I got a second wind just before the 5-mile point that made me decide to press on to Brillhart. When I stopped there for a stretch break, I had sharp pains in the muscles on the fronts of my shins, which I've now had a few times since the marathon. Stretching my ankles in different directions seemed to relieve the discomfort.

Though I felt a little wobbly as I started back, some Sports Beans and Gatorade seemed to help. I made it back to Hanover Junction for a total of 12.75 miles in 2:03, which is good enough, but I just felt like I was dragging for most of this run. It's ok. For once, I"m not going to overreact to a crummy long run. This is almost exactly where I was at this point last year, and once I get back into my routine after the holidays, I'll be fine. While I didn't do well in Texas, it does seem like in general that motivation to get out and run during the week is back, which bodes well for Virginia Beach. 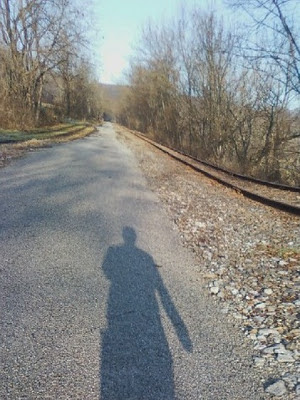 (I'm a shadow of the runner I was just a few weeks ago.)

That theme continued on Sunday. On the plus side, I lifted in the morning, and seem to be getting back in the habit. Unfortunately, my back has been bothering me a little this week and it flared up yesterday. I woke up on Tuesday, Wednesday, and Thursday morning with stiffness in my lower back, but would loosen through the morning and really didn't bother me much. However, as I was lifting, while on my last set it just felt like all the muscles in my lower back were cramping up, and it still is aching today. Hopefully this isn't the beginning of something nagging.

Since it was a rare Sunday without plans, Chris and I decided to go for a bike ride, which would be our first since August. It was kind of a disaster. I found that the bike tires needed air, but I'd read that you shoudn't use a pump meant for cars to pump up bike tires. I had a foot pump, and grabbed it to take with us to our starting point at York. Well, first, it wouldn't inflate the tires and then the hose broke off, anyway. Off to Dick's to buy a new pump, and then off to Hanover Junction since Dick's is midway between it and York.

Finally, we were able to get underway, only to find that neither of us had any energy at all. It's totally understandable in light of the long biking layoff and tiring runs the day before, but was still frustrating. I will also say that while I like cold weather while running, cold weather for biking was not fun! It made it seem 20 degrees colder than it really was. I'll definitely be using the cold compression gear next time out.

Up Next
My plan this week was to do "regular" runs on Monday night and Thursday, my first speedwork session tomorrow, lift on Wednesday and Friday, and then run in the Celtic Solstice 5-Miler in Baltimore on Saturday. I'll see how my back feels, but I suspect either tonight or Tuesday will get skipped. I'm also not sure how much I'll race the 5-miler. In 2009, I ran the Al's Run 8K in Milwaukee in 42:45. That's probably not achievable these days, since I pushed myself on pace in all my long runs back then and I really haven't done that since spring of 2010. I'd be very surprised if I could come in under 45 minutes and I think somewhere around 50 is probably a more realistic goal. I suspect the course will be crowded, and I know it's at a very scenic location, so I think the best strategy is to just enjoy myself, run a comfortable pace, and worry about smashing some PRs in 2012.