On Thursday, I got an early Christmas present from my mother-in-law: a Kindle Fire. She had gotten one for Chris, who mentioned that if she she still needed an idea for me that I had gotten addicted to playing Stupid Zombies and would probably like my own.

I've recently read some poor reviews, and I feel the need to come to the defense of my new little electronic friend.


To put it simply, the Kindle Fire is a procrastinator's dream. On this small device, I can easily read books, surf the web, and play a variety of casual video games, but not really do anything productive. 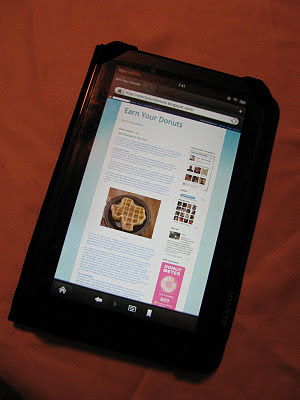 (Speaking of "not productive"...)
I'd never really wanted an e-reader before. I love books, and I really didn't think I would like reading on the Kindle, but it's better than I expected. The Fire won't replace books for me, though. Instead, I think it will fill a niche: travel. I read a lot, so if I'm going on a trip, I sometimes have to bring 2 or 3 books with me, especially if there's long plane rides. In this case, the Kindle Fire saves space in my carry-on. With many games available, and there are some fun ones available for free, like Stupid Zombies and Blackjack, it's perfect for entertaining oneself on a plane. I spent a good deal of the plane rides to and from Dallas playing Solitaire and Parachutes on my iPod, so the Fire would have been a considerable upgrade.

It's good for surfing the web. Scrolling through web pages is generally easy and I thought, despite complaints about speed, fast. Video generally seems to play well on it, depending on the quality of the video on the website, of course. I watched part of an episode of South Park at www.southparkstudios.com, and it was fine, but when I watched some Eagles highlights on the team's website, the video was rather blurry. However, keep in mind that full-screen on the Kindle Fire is larger than the video would be if you watched it on a window on a website, so it only gets more distorted.

The Kindle comes with a free month of Amazon Prime, which includes free streaming of a selection of movies and TV shows. I watched part of an X-files episode that was available, and the video quality was excellent. I haven't decided if I'll keep Amazon Prime or not, but the subscription does give access to more video content and make a wider range of books free to either "borrow" (meaning you have it for only a limited amount of time) or "buy".

The Kindle is good for surfing the web, but what it (and most tablets, I suspect) is less good for is adding anything to the web. Typing on its touchscreen is slow. It took me several tries to update my dailymile log for last night's run, an interaction that would have taken under a minute on the computer. I have skinny fingers, and I find that clicking on things on the web works ok, but a stylus for pointing and clicking may be helpful.

The Kindle Fire is my first tablet device. I couldn't be happier with it, but I suspect it's all a matter of perspective. I've been drooling over an iPad since they came out, but just couldn't really justify spending the money on it. For me, the Kindle Fire fills the niche quite well. If you've had an iPad, or really had expectations for the Fire based on a more detailed knowledge of what an iPad is capable, you're probably going to be disappointed. The iPad's ability to video chat is the only feature missing that I know of that I would miss.

Remember, though, that the Fire is less than half the price of an iPad! Of course it's going to do less. For what you, or in this case my mother-in-law pay for it, I think the Fire is worthwhile. Of course, Amazon's strategy seems to be sell the devices at a loss and make up for it in content sales. I'm sure I will purchase books and games eventually, but right now between free books and games, I'm well-entertained enough without having spent an additional dime.

I wasn't compensated any way for this review, though I would gladly accept some of Amazon's sweet, sweet money. I also didn't write this review on my Kindle Fire, because it would have taken days to write.