Today, I didn't take any magic pills.  I ran 1.2 miles in 12 minutes and my shin and the side of my calf hurt and I couldn't move my foot the whole way.  I limped back to my car and I just feel like maybe I can't do this any more and it's not worth trying.  Have I just reached the point where I should just look back on the good times, take all my DNSs, accept that this part of my life is over, and start whatever the next chapter is?

In reality, no.  I clearly haven't gotten there, yet.

It's been about a year and a half since I first started having these troubles, but I did seem to have a nice comeback last Spring including 5K, 8K, and 10K PRs.  I relapsed rather badly in September and took basically two months off.  Since starting to run again in December, it seemed like there was progress, but it's only been the last month in which every single non-drug-assisted run is bad.  Indomethacin probably isn't a good long-term solution, but  I haven't been back to the orthopedist since November (I've got my appointment tomorrow).  I haven't been through PT yet, although I've got a feeling that's where I'm headed.  I haven't had surgery. I've still got 25 pounds I need to lose.

There's still a lot left to try. I know that.  And I both know of and know personally runners who have come back from more severe injuries. I'm not ready to quit, but now that runs like this are the norm, it's just too easy to wonder whether it's worth trying anymore or if I'd be happier if I just gave up. 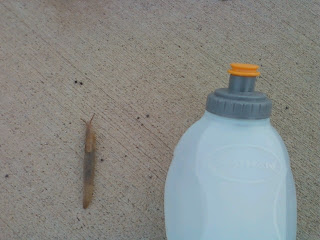 This slug, seen on my run this morning,
would beat me in a 5K right now if I don't take indomethacin.
Posted by Brian at 9:58 AM