I know I shouldn't complain.  One of our running friends ran a marathon in Michigan this morning with four big metal screws in her hip.  Her husband ran the half.  Both had a space-alien theme complete with probes, death rays, atomic cats, and flying saucers*.

But, if you read this blog at all, you know that if I didn't complain, there would hardly be any posts at all.

So here we go:  This was the  Hilliest. 5K.  Ever.  This race was ridiculous.  I think Dreaded Druid Hills is hillier, but that's the only hillier race I've ever run.  (Which means it's the hilliest race ever, of course.)  Which totally excuses that this was my personal worst 5K.  I've had a few too many of those lately, but I don't feel badly about this one at all. 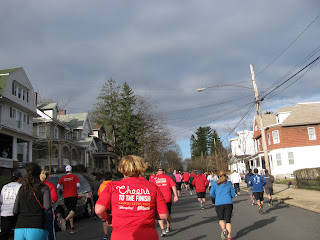 I'll stop the complaining now, though, because Lager Jogger was fun.  The whole first mile was uphill (I thought it would never end), the second mile was a mix of gentle downhill and very steep uphills (yes, I took some walking breaks!), and mile three mostly a gentle downhill with a very steep downhill right at the mile 3 marker and a downhill finish for the last .1 (which seemed long to me.  I did take a walk break on the third mile, when my shins were bothering me.).  I can feel my conditioning starting to come back a little, since I've been able to run a little more w/the help of naproxen, and I'm happy with my effort,which led to a finish time of 33:01, smashing my previous P-dub of 31:24. 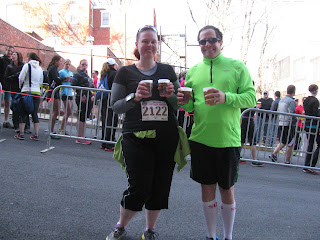 
But, the crowd support was unbelievable for a 5K, the course was quite scenic, and the weather was very Brian-friendly (cold and windy).  Of course, Brian-friendly weather during the race makes for very chilly conditions after the race, but that didn't dampen the fun after party outside the Yuengling Brewery in downtown Pottsville, with plenty of Light Lager to be had.  I admit to being somewhat of a beer snob, but Light Lager is a very good light beer. (Yuengling Lager has been a trusty standby since college and Lord Chesterfield Ale and Yuengling Black & Tan are my favorites of the Yuengling line.). 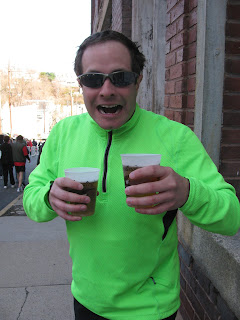 In addition to the Light Lager beer party, racers had the opportunity to tour the Yuengling Brewery.  Chris and I took advantage of this, and we had a fun time!  Yuengling claims the title of "America's Oldest Brewery" (that's one of two things the first tour guide wanted us to remember. I forget the other one.), having started brewing operations in 1829 and moving its brewery to its current location in 1831, after a fire destroyed its original building.  The tour was quite educational, and an interesting contrast if you've had a chance to tour a larger, newer brewery like Miller's main Milwaukee plant (which does have some neat old buildings) or Anheuser-Busch in Williamsburg (the other big breweries I've toured.).  Yuengling has newer, larger breweries outside of Pottsville and in Tampa (which is also outside of Pottsville, I suppose.) 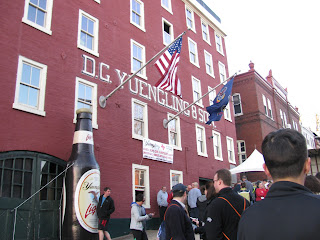 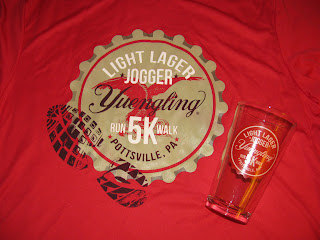 *I just made this up. The Martian Marathon seems does have a fun Martian/alien theme, though.
Posted by Brian at 5:07 PM