It seemed like a good idea at the time.  (I feel like that could be a good alternate title for this blog.)

It seemed like a GREAT idea, actually.  I love bacon.  I love Orioles baseball.  When the two came together to bring me "Bacon on a Stick", I had no choice but to try it.

One of the great things about Bacon on a Stick is that there are no surprises.  The name is exactly what it is. 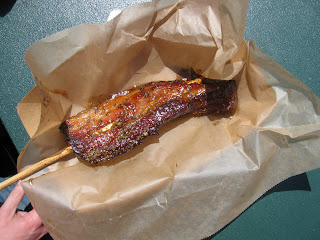 I'll be honest, though, bacon-lover that I am, Bacon on a Stick was not for me.  I like my bacon very crispy.  This was not especially crispy.  It wasn't floppy bacon, mind you, it was just very, very thick and so it still tasted fatty.  If you're a fan of very thick bacon, you'll love it.  It was well-seasoned and the lean parts of the bacon were tasty.

If I get it again -- and I make no promises -- I might see if they can do an extra-crispy slice for me, as they are cooked right there at the Bacon on a Stick stand. 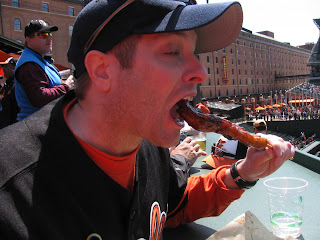 (I had another picture of me eating Bacon on a Stick in which I looked less troll-like,
so I decided to post this one.)

And, since this blog post is completely unrelated to running or injuries and kind of worthless, anyway, it can only be improved by a random picture of Adam Jones at the plate: 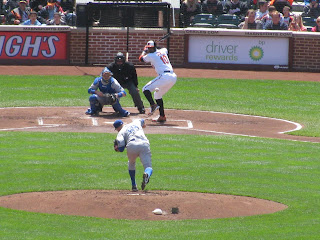 The Orioles would go on to lose the last game of this series with the Dodgers after taking the first two, but their fans went home with full stomachs.
Posted by Brian at 7:06 AM