I was really dreading the 2013 Sole of the City 10K.  I haven't been able to get even a 5-miler in since the 8K in Virginia Beach, and I have only one 4-miler. Even with aid of prescription-strength anti-inflammatories, most of my runs just haven't gone well.

This one didn't go all that well either, but it wasn't as bad as I was afraid it would go:  I ran 4 miles of the 10K course, but then needed some walk breaks to get through the last 2.2 as my compartment syndrome really flared up.

The damage?  1:08:21 -- compared to last year's 57:17.  The good news, if I can call it that, is that it felt like my conditioning is coming back.  I paced myself well, didn't feel completely out of breath, and ran (most of) 6 miles for the first time since July or August of last year.  The bad news, and I can definitely call it that, is that even with a steady diet of naproxen leading up to the race, my symptoms were pretty bad.  There are sometimes where I've limped back to my car with aching shins and lack of range of motion in my left foot where I think I unconsciously exaggerate my limp a little because it's embarrassing, but I was really limping pretty badly during my walk breaks.  (I could run somewhat more normally, it was just more painful and I needed some breaks.) 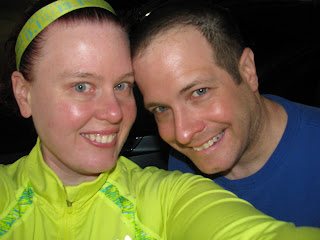 (Race organizers suggested people wear blue and yellow to honor the Boston
Marathon bombing victims.  We also had a signs pinned to our backs,
but mine ripped off when I put my long-sleeve shirt on.)

Review
I like this race, but there's not a lot to distinguish it from other local races.  The swag is nice, but other than that it's the generic Baltimore race around Inner Harbor and Key Highway.  The course is challenging, in my opinion, because the second half of the course is hillier than the first half, but I didn't struggle as much last year when I was less injured and better conditioned. 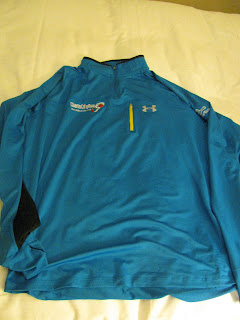 (Men got a blue quarter zip Under Armour running jacket.
Women got a full-zip.  Hey!  I want a full zip!) 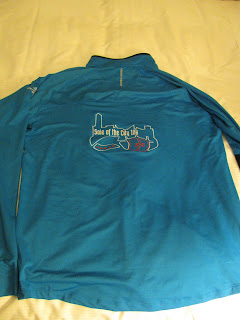 It was very crowded at the start and could perhaps use a waved start, but is generally a well-organized event.  I thought the start of the race was better handled last year; this year the race started about 15 minutes late and I wasn't able to hear announcements or the National Anthem at all (last year they had an amazing National Anthem singer, this year I couldn't even hear it well enough to know when to yell "O!")

The post-race party was more spread-out this year, with the beer truck parked farther back from the finish than it was last year, when everything was crowded by the Greene Turtle (the bar that is one of the main sponsors).  The array of snacks was good, they had several wrap options including vegetarian and free beer.  The beer was Bud Light, however.  I just ran a race -- I don't need to have a low-calorie, flavorless beer!  Still,I shouldn't complain; free Bud Light is better than no free beer at all, and it was cold and refreshing on a cold and windy day, but one in which I was feeling pretty heated since the sun was out for most of the race.


I'll probably run this race again next year -- and hopefully be about 15-minutes faster whether or not I have those pesky muscle fascias in my left leg weighing me down!
Posted by Brian at 7:00 AM