Earlier in the month, I went to the orthopedist to talk again about the persistent calf and shin pain I've been having, mostly in my left leg.  With x-rays and MRIs coming back clean and rest, stretching, and calf exercises not doing much to help, the doctor determined that it was time to take the next step and do the test for Exertional Compartment Syndrome (which I'm going to call ECP).

Unfortunately for me, the test for ECP involves big needles being jammed into four places on each leg, then me running until my symptoms flare up, and then needles attached to a pressure-monitor being stuck in again. 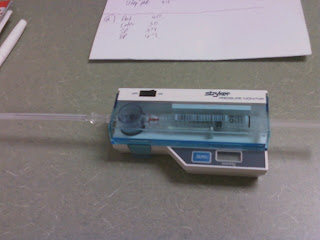 I'm a wuss.  I've been dreading this.  The doctor and his assistant put iodine on my leg and used a small needle for local anesthetic, and I'll be honest, the procedure itself wasn't as bad as I feared.  It was probably worse for the doctor, who had to put up with my nervous banter between him, his assistant, and Chris (who was kind enough to accompany me for moral support and to drive me home).  I think I did crack one good joke during the procedure:  As the doctor was using a pen to mark where on my leg where he would insert the needle, I deadpanned "that wasn't as bad as I thought."  It was pretty much downhill from there.

When I left the office with the assistant, who accompanied me to show me the likely direction that would be safest for my run, my calves still felt a bit numb.  The run itself seemed ok considering I didn't take any naproxen, I didn't stretch, and I didn't wear compression socks.  All of these anti-precautions were in hopes of making my symptoms flare-up badly and quickly.  Instead, I ran for 20 minutes and while my calves became very sore, I didn't have the level of shin pain that I normally have.  I did feel kind of stupid running around the medical center, but I never run on treadmills and so I thought it was best to go outside.

Despite the lack of shin pain, I sat down to check that my left foot didn't have the full range of motion and given the level of pain in my calves, I figured I was "good" to go back and be re-tested.

The second round of tests hurt a bit more than the first,  but not as much as the results (positive) and the aftermath (calves extremely sore all day). 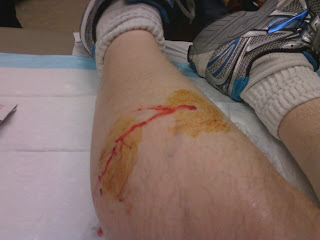 My best option is surgery, but with my doctor's blessing I'm going to try a few weeks of physical therapy first.  It probably won't work, but really don't want to have surgery.  I can't stress that enough.

A second is option is quitting longer distances.  Stop running or stick to the mile, 2-mile, and 5K.  I admit this option is tempting after a frustrating, often unenjoyable last 16 months of running.  But on the other hand...if I'm going to give up running, I really don't want to go out like this either.  I'm probably not going to be a frequent marathoner, ever.  But I'd love to get back to my 2011 form in which I could run 8-10 miles several times a week and train myself up to a half without much trouble.  More specifically, I would really like to be able to run the AC half this year and either the half or hopefully the full next March in VA Beach.

I've quit a lot of things in my life when they got too tough:  tee-ball, soccer, basketball, cub scouts, jobs.  I don't want to quit running yet.

Still, before I get ahead of myself to the surgery/no-surgery decision, I'm going to cross my shins and hope that PT will do the trick.
Posted by Brian at 7:48 PM