You've probably already heard about Bryan Stow, a 42 year old San Francisco Giants fan who was beaten within an inch of his life when he had the gall to wear a Giants jersey to the LA Dodgers' home opener.

The incident has justifiably garnered a great deal of media attention, but today I was directed (via my favorite Orioles blog and the blog of Jeff Pearlman, a writer at - among other places - SI) to a slightly different take on the incident by Pittsburgh area sports media personality John Steigerwald.

His article, "Know When You've Outgrown the Jersey", takes a look at some negative aspects of sports fan culture and also seems to place blame not only with these idiot Dodgers fans (who I strongly suspect represent only the tiniest minority of their fan base) but with Stow himself:

Maybe someone can ask Stow, if he ever comes out of his coma, why he thought it was a good idea to wear Giants' gear to a Dodgers' home opener when there was a history of out-of-control drunkenness and arrests at that event going back several years.

Not only does sound tasteless and unsympathetic, it appears to be a classic case of blaming the victim. Unfortunately, I think there's a shred of truth here. The person who wears an opposing team's jersey at many arenas faces increased risk of being the target of not only verbal harassment (both good-natured and not) but physical violence as well. However, it seems like Steigerwald’s missing the point that it shouldn’t be that way -- a fan who wears the opposing team's jersey shouldn't be risking life and limb -- as well as the important questions, such as “why is it that way?” and “how do we fix it?"

Steigerwald goes on to say that maybe we all need to grow up:

Remember when it was the kids who were wearing the team jerseys to games? It was a common sight to see an adult male coming through the turnstile dressed as a regular human being with a kid dressed in a "real" jersey holding his hand.

Are the 42-year-olds who find it necessary to wear their replica jerseys to a road game, those kids who are now fathers who haven't grown up?

Are there really 40-something men who think that wearing the jersey makes them part of the team? It was cute when a 10-year-old kid got that feeling by showing up at Three Rivers Stadium in a Pirates jersey, but when did little boys stop growing out of that?

Again, I think he's focusing on the wrong thing. Is it dorky for adult fans to wear jerseys with the names of other men who are the same age or younger than them? Yeah, probably. (This is coming from a 34 year old who wears a DeSean Jackson jersey for every Eagles game and proudly sports a black-and-orange hat with a cartoon Oriole Bird on it.) But that's what he identifies as a contributing factor to the increasing culture of fan violence? I think there's some bigger at work.

I think that for a lot of fans (and again, I'll point the finger at myself here) sports have become more meaningful than they really should be, and fandom today for a lot of people seems to be just as much if not more about taunting opposing fans as it does cheering on your own team's successes.

To me, it appears that a lot of sports fans' senses of identity are too tied up in what color uniform they root for on the field. Hence, the guy in the Giants jersey is seen as "the enemy" and not just a guy who happens to root for the other team.

I've probably already gone much too far in playing amateur social psychologist here, but I wonder if people in general in Western society perceive their lives as being more disappointing or difficult than they did in previous generations. I absolutely don't think they are -- look at what the life of a serf in feudal Europe would have been like -- but it's so easy to turn on the TV and see someone who's got it better. Maybe greater disillusionment with country, work etc. have contributed to a lack of a sense of community or meaning that previous generations had, and sports has filled this void and/or became outlet for frustration that would have been expressed in different ways, both positive and negative, in previous generations.

Or, maybe sports fans in Imperial Rome were beating up guys in "Pompeii" togas in the parking lot after the big gladiator games, and there just wasn't media coverage of it.

So what does any of this have to with this blog?

This story jumped out at me because I'm definitely a person that takes his sports fandom too seriously. I'm never going to pick a fight with anyone (and if I did, I would lose), but I've been known to sulk my way through the week (or offseason) following an Eagles playoff loss. Likewise, I sometimes irrationally feel like the Orioles never-ending losing streak has come to reflect poorly on me. To a large degree, my sports fandom had become stressful and not fun or relaxing.

This is a big reason that I started running longer races --- I needed something that I could take pride in about myself that wasn't dependent on others. It was in the wake of an Eagles playoff loss in January 2009 that I first considered signing up for my first half marathon, and a great run the day after freezing my butt off at this past season's miserable playoff loss helped me bounce back.

I'm not cured, but I think it's helped. I still get too excited or negative during the game, but I think having an event of my own to compete in has helped me to obsess less once the game is over. I've also cut down a bit on constantly decking myself out in bird-themed gear because I think in my case that did contribute to my too closely identifying myself with these teams. Instead, I'd rather wear something I can take pride in not because someone won a championship in 1983 or (ouch) 1960, but because of something I accomplished.

For me, maybe it should be less of this: 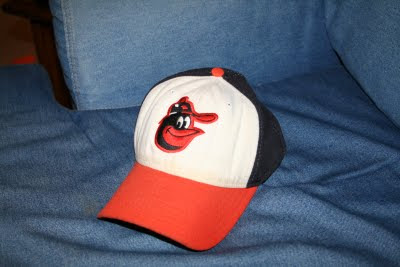 (You do have to admit, though, that it's the coolest hat ever.)
And more of this: 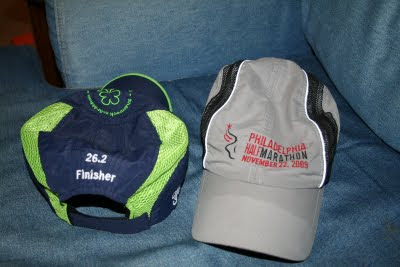 (And yes, the Shamrock Marathon hat, on the left,
is really, really ugly. How am I supposed to wear it all the time
if it matches nothing?)
In general, though, I think people should go on wearing their jerseys, rooting for their teams, celebrating the wins, and being disappointed in the losses. But, if you're still feeling depressed three days after the game or if you're really feeling anger toward someone just for wearing a different jersey, maybe it might help you too to get out on the road.

You don't need to bask in the reflected glory of Donovan McNabb, Andre Iguodala, or Brian Roberts (sorry, guys). Get out there and be your own hero.