This was my first time at the Dreaded Druid Hills 10K, and I wasn't really sure what to expect. Internet chatter about this one had led me to believe that this would be hilly well beyond any race I'd run before, but I do normally run a hilly route and had done pretty well on what I thought would be a decent simulation of it.

I wasn't sure what to expect as far as a finishing time, either. My 10K PR was screaming to be broken, since I've run only one 10K in my life, the 2009 MCVET 10K. I'd never run six or more miles, so I paced myself very conservatively and came in at 59:40. I generally come in at six miles at about 55 minutes on my normal runs more recently. Still, based on all the reports I'd been reading, I did not expect to beat my PR at this race.

Pre-race
Races in Baltimore are tough for me. I'm a morning person -- I try to be out running by about 6:15 during the summer, but since I like to get to races early, a 7:30 start time in the middle of Baltimore means I try to leave my house not long after 5:00am, and since I need to do all my IT band exercises before leaving, this means I was up at 4:00 and going on 4 hours of sleep.

I left my house at 5:20 and was at Druid Hill Park at 6:29 -- right before they opened the lake gate
for race day parking. I went in at what I guess is a main gate and easily found parking, but since there was nothing to indicate which way to go from there for packet pickup, I wandered in the general direction of where I thought it would be (near the pool and tennis courts).

Druid Lake Park (home of the Baltimore Zoo), is really very pretty. The first glimpse you get of the park from 83 South is The Moorish Tower, a tower at the corner of the park on one end of Druid Lake. As I got out of my car and wandered, I was rewarded with a gorgeous sunrise over the lake. 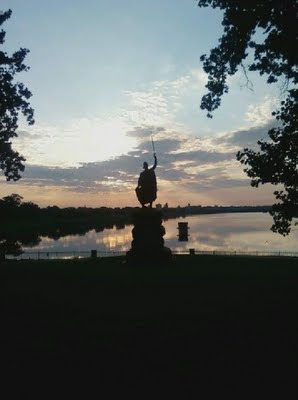 (Yeah, I recycle pictures a lot.)
I still didn't see packet pickup, though, so I headed in the general direction of the tower, since I knew that was the finish line. Luckily for me, I turned off the lakeside path and ran right into a pavilion where I saw people walking up and getting their packets. I picked up my race bib and giveaway, a very nice Orioles orange Asics sleeveless technical shirt with the race logo on it, and headed back to my car to drop off the new shirt and grab my Garmin and hydration belt. 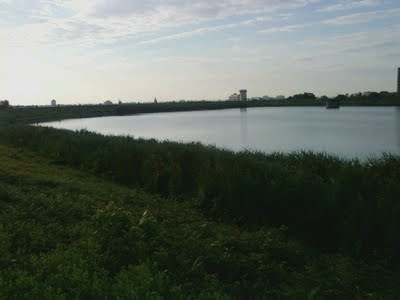 (Druid Lake. The tower seen in the distance was the site of the finish line.)

Nothing I saw or overheard before the race made me feel more ready for it.

am not one to run t before the race. I stretch, and I'll walk around to loosen up, but I've always figured that I have a limited number of miles I can run each day and that each mile I run prior the race is one less I'll be able to run during it. I've NEVER seen as high a percentage of racers jogging prior to the race start.

As I was stretching, I overheard one gentleman tell a friend that "whatever your 10K PR is, you should add five to 10 minutes to it." I also heard, while in line for the port-o-potties, a woman tell a friend about the time she was at a Muddy Buddy run dressed as a rhinoceros and neglected to properly lock the port-o-potty door. I, though not dressed as a rhino, made extra sure that mine was properly latched.

I lined up about 3/4 of the way in the back of the pack at about 7:25. A few minutes after 7:30, we heard bagpipes, and a piper, followed by the race organizer, parted the crowd and walked to the front of the pack. I never heard an air horn, gun, or any signal, but shortly thereafter everyone in front of me started running and so I headed for the hills. too.

The Race
The first two miles of the course were rolling hills. If the whole race had been that hilly, I still would have said it was probably the hilliest race I'd run to date, but it was nothing terrible. After mile 2, the route started to get windier and the hills became much steeper and longer. Miles 2 through 3.5 were all uphill, very steeply at times, and then a steep decline, followed by a steeper, not as lengthy a climb and then a gradual downhill toward the finish line starting at a little past 5 miles (sorry for the guesses at mileage, Garmin didn't get a signal for large portions of this race) and flat 1/3 of a mile around the lake to the finish at the Moorish Tower.

I'd heard that the first half the race was easier than the 2nd, which was true, though as above I think the real distinction was that the this was a moderately hilly two-mile race followed by an extremely hilly four-miler.

My strategy was to try to keep an easy pace to save strengths for the hills. Early in the race, my legs just felt like lead. However, within a half mile they'd loosened up and I started to feel very good. The field was still very bunched at that point, and in the quiet park it was really net to hear nothing but the sound of thousands of footfalls. I hit mile 1 at about 9 minutes, a little faster than I wanted that early in the race. The second mile, mostly downhill, was probably the easiest mile of the whole course. At mile 3, the hills began in earnest. I also lost time to remove a stone from my shoe, but I reached the halfway point in great shape at about 28 minutes.

The hills were quite steep, but we had several things going in our favor -- it was an overcast day for most of the race, with a nice breeze, and even after the sun emerged there is a TON of shade on the course. I've never run a race that was mostly in the shade and it was gorgeous! At one point after the sun came out, the course went outside the park and onto the streets of Baltimore for a few blocks, and it was sweltering. Even though a turn back into the park meant a return to hills, the shade was welcome. Just past the fifth mile marker, the course emerges from the woods. "No more hills", the volunteers told us, just a short, not-steep incline followed by a shallow decline and a mostly flat finish. Warming up quickly in the sun, I dumped a cup of water on my head and charged for the Moorish Tower. 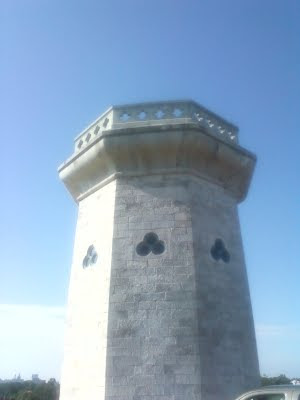 (The aforementioned Moorish Tower)
I knew as I reached the last water stop that I had a shot at a PR, and I wanted to pick that admittedly low-hanging fruit! I'd paced myself as well as I had any race, I feel, and I had enough left for a great finishing kick to round the lack and finish in 57:37 (unofficial watch time, no chips in this race), a PR by over two minutes!

Review
I had a lot more fun at this race than I thought I would, and it was also much-better organized than I thought it would be. The race didn't really have a website, and we didn't receive ay e-mail communication at from race officials until this week, and when we did it included a note that Active.com's ordering function had malfunctioned and my size shirt might not be available.

Instead, it ended up being both a nice event and very enjoyable race. I talked a little trash in my last post and on facebook, but I won't lie, it's hilly as hell. I know I only PR'd because of small sample size when it comes to 10Ks. That said, I think if you either pace yourself convservatively, like I did, or walk some of the uphills, that this race isn't as bad as people say. I mean, some of the quotes about this race make it sound like you're going to die if you're not some extreme hill runner. The uphills are bad, but the downhills are just as long and make up for them.

The location made it more enjoyable than an average race in York or even Baltimore (run up Key Highway and turn around!). Like I said before, Druid Park is very pretty. The lake (Druid Lake reservoir) is picturesque, there are some nice old buildings that I believe are admin buildings for the Zoo, and the finish at the Moorish Tower is a great exclamation point to the race. 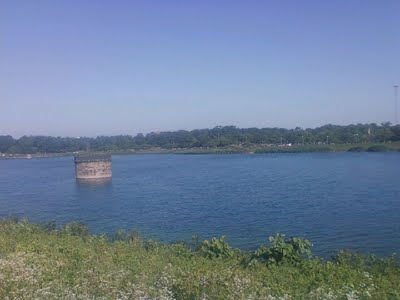 (Druid Lake as seen from in front of the Moorish Tower)
The post-race spread was great, too. I don't mean to complain about the weather, because I really couldn't have asked for a nicer day at the end of June, but it was a warm day. Finishers were greeted with strawberries, grapes, bananas, apples, and best of all, in my opinion, ice-cold slices of watermelon. 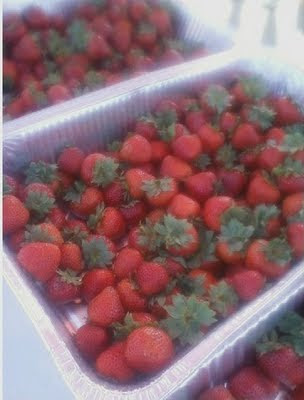 (I will run hills any day for fresh strawberries.)
I should also mention the schwag. For $30, I got a very nice Asics sleeveless technical shirt. The shirt was optional -- you could omit it for a lower price -- but since I'd heard such horror stories about this race I wanted to have one. The excellent thing about this giveaway is that it's something that's actually useful. I have no need for more cotton t-shirts, and even technical t-shirts are of limited use for me, since the range of temperature at which I wear them is very narrow. I'll get a lot of use out of this shirt as a running shirt, and I chose orange over grunge green so that it could double as Orioles gameday wear for super-hot summer day games. 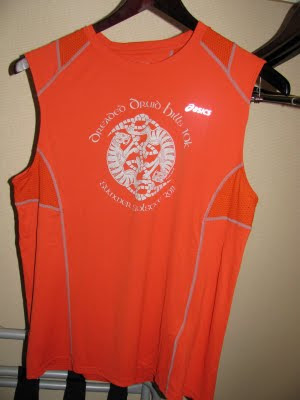 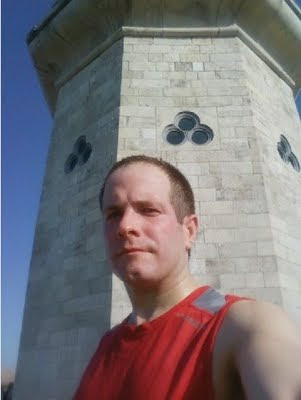 (Every finisher also got a free Moorish Tower.)
The only area for improvement, in my opinion, is communication. A website with more information about the course would be a bonus (I think a new baltimorerunning.com is under construction) and some signs directing people to packet pickup would have made things a bit easier. Overall, though, this race was great. Challenging, unique course; very nice schwag; excellent food after the race; beautiful location.

A tip of the cap to the Falls Road Running Store -- this one might have to be the summer running tradition that I've been looking for.