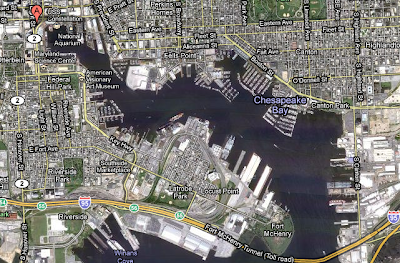 Today's run was an adventure. A ridiculous, perhaps ill-conceived adventure, but an adventure nonetheless. A friend from my training group and I tested our will, and our legs, against gale-force winds at Baltimore's Inner Harbor. Somehow, the wind seemed to be in our faces much more than at our backs both on the way from our start at (I think) Canton Park to Fort McHenry and back.

There were several times, particularly as we ran the seawall at the fort, where I felt like I could barely push forward through the wind, and another time where I rounded a corner into the wind and was almost blown right into the harbor. A swim would have been a shortcut, at least. And maybe cleaner, as my poor face was sandblasted by dust and grit at several windy points in the run. 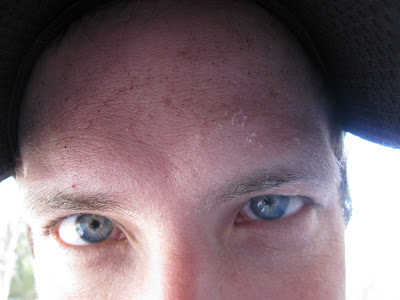 (I'm sure you wanted to see how much Inner Harbor debris was stuck to my face when I got home.)
Still, it was a really enjoyable and scenic tour of Baltimore that took us through Fell's Point, by the Under Armour factory, past Federal Hill, and around all the familiar touristy sights of what I always thought of as the Inner Harbor. Baltimore really is an awesome running city --I was amazed how many other crazies we saw running on such a wild weather day. Proper layering was essential today; the wind was cold, the sun was hot (for February!). I was very, very glad that I brought a windbreaker to start the run, but I was in sleeveless by the last four miles.

This has been a tough running week for me. (I've been saying that too often lately.) Between fighting off a respiratory infection earlier in the week and a crazy work schedule, I'd gotten just six miles in on Wednesday night and nothing else this week. My calves felt like they never recovered from that, and they were my downfall today. The IT band was sore but bearable. Whether illness, wind, or just lack of conditioning from my bad month of running, or some combination of all of these, this run was a lot more challenging than I thought it would be after last week's 12 miler and I had trouble keeping up today. 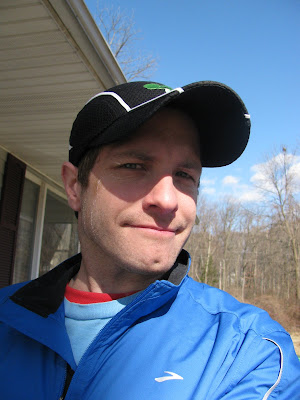 (My eyes felt like they had been immersed in the Harbor.)
That said, we did finish 14.3 miles in rough conditions in 2:36, and the knee held up ok. I think the implication of this is that I can nurse it through the marathon, but I absolutely must make sure I get in more frequent weekday runs, even if I don't have time to make them 7-8 milers, to build my stamina back over the next month. I've got to do my PT exercises. I've got to get back to lifting, as my shoulders were really sore today. And most of all, I have to find time to run. If I fail because of my knee, so be it. But I won't not succeed because I was too busy to train hard in the last month.