I know this is supposed to be my running blog, but I realize it's been more of a "*****ing about my knee blog" lately, so I am sorry for that.

I admit I've been pretty stressed out lately, but I've got nothing on one of my great friends:

1. He's had surgery to remove bladder stones.
2. He's conquered diabetes
3. He's got a nuclear thyroid that is eating him alive

4. He's the 1 in 1000 cats with an allergic reaction to methimezole (his thyroid medication, which was working quite well, by the way), an inflammation right in front of his ears that he keeps scratching till it bleeds, causing him to be fitted with a cone. 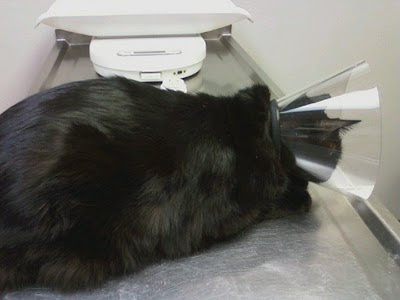 One small step for a cat...one giant leap for catkind.

I admit, I thought this would be hilarious and I was ready to laugh at him. Couldn't they have at least given him a white cone? Couldn't it have rainbows, or racing stripes, or a jungle theme? If you're going to make my already funny cat look funnier, make him REALLY funny.

But, instead, it was just sad. We took him home from the vet and since he was just lying on the back of the sofa and not scratching his ears, we didn't put the cone on right away. Once he started scratching, though, we had to put the cone on, and he was terrified. He does run into things, which is what I thought would be funny, but he just seemed so sad and scared and determined to get the cone off that I just feel terrible for him.

Last night, I left him upstairs on a little Pooka nest of fleece blankets, so that he would be near his litterbox if he had to go. (I wasn't sure yet if he could navigate stairs with the cone on.)

This morning, I found him downstairs lying on the armrest to our old fold-out couch. When I sat down next to him and started petting him, the brave not-so-little guy surprised me by purring loudly. 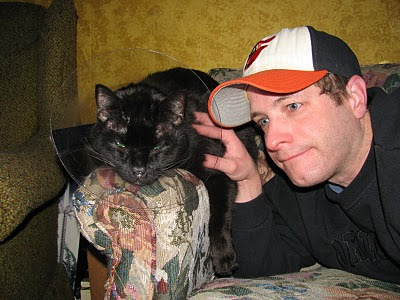 Me: "Don't worry, bud; things will get better."
Pooka: "Yeah, they'll get better when I've killed you and I'm eating your corpse."
Now it's Friday, a day formerly reserved for ass-kicking. Lately though, it seems like a lot of people (and cats) that I know are having a tough time of it and are just feeling a little (or a lot) beaten down. We all have our plastic cones to bear, but sometimes they come with rainbows. May you all find the rainbow in your cone today. 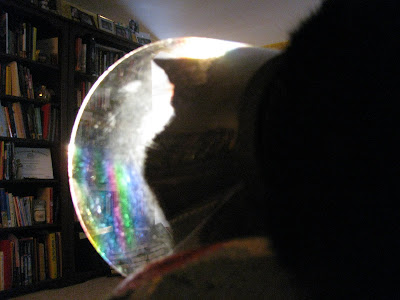