Some odds and ends:

I already described my excellent, challenging run through Montreal's parks and waterfronts, but that wasn't my only scheduled run on vacation. I was planning to run on Tuesday, my normal "every other day" run, and then again on Wednesday, since I didn't want to get up super early to run and then drive all day on the trip home. However, I found that I was considerably sore from my Sunday run. I suspect it was a combination of a faster-than-usual pace at that distance and the inclines of the bridge and the park at the end of my run. But, at any rate, I'm used to running and then sitting around all day at work, not walking around a lovely Canadian city. I wasn't up to doing so much walking after such a tough run.

So, on Tuesday, I decided to take it easy and stay on the Longueuil side of the river, taking the bike paths and sidewalks (mostly) along Rue Riverside in order to give myself a flatter course. At one point, I tried to take a path that crossed over the highway and ran directly along the river. However, the section that led northbound, through a portion of Jean Drapeau Park that had spread to this side of the river, was closed, leaving me with a southbound gravel access road along the St. Lawrence Seaway that I really didn't think I should be on, so I kept myself to the paths and sidewalks of Longueuil and Saint-Lambert. It was a nice run: 9.9 miles in 1:37:53. 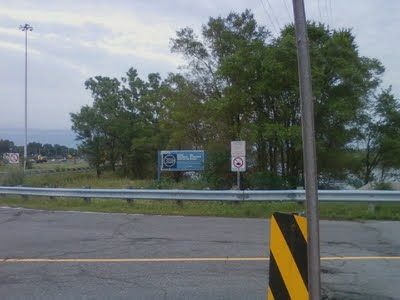 (This sign either says "St. Lawrence Seaway" or "Keep Out, Idiot.") 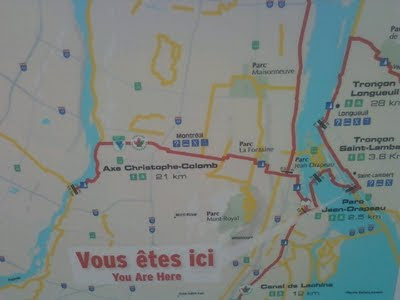 
Not bad, considering how tired my legs were. Since my calves hurt all day as we walked around Montreal, though, I decided to skip Wednesday's run and just enjoy the last day of vacation. Great decision.

My knees had been hurting me on Thursday and Friday, during the long drive home and the day after, and I was worried that I was heading for a relapse of ITBS. While the knees were a bit sore during the run, it was my calves that were the biggest problems. It just took them approximately 5 miles until they really felt loosened up. It was a cool, but extremely humid morning and just one of those runs that makes me think I should get a new hobby. However, around mile 7 I found out that I was concentrating so hard on how much I hated running and how gross I felt, that I actually felt better! I believe I ended up with 12 miles in 2:05. 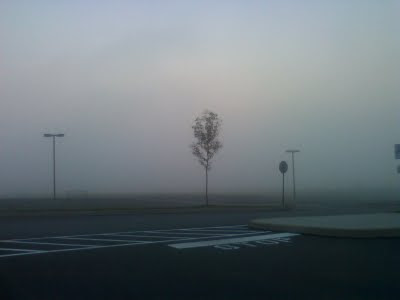 (When it looks like this at the start of a run, I know I'm in for a tough time.)

Of course, my actual time and distance are educated guesses, as I paused Garmin to take a picture of the fog, and forgot to restart. For comparison, I ran the Philly Half Marathon in less time than this both times, but this isn't too far away from where I usually am on my training runs. (Keep in mind the Philly Half is a pretty fast course compared to stupid, hilly Manchester). Not my best run, but I got in my garbage miles. Higdon's calling for a step-back week next Saturday, with 9 miles. While I just started the plan, I've run higher-than-recommended long runs the previous two weekends, so I think I'll take my step-back week, which works nicely with a busy weekend coming up. Midweek runs are 3, 6, and 3 on Tuesday, Wednesday, and Thursday. Schedule this week is crazy with business travel and even possibly a 7K race (which I'd just treat as a training run) Friday night, so I'll probably change this to two 7 or 8 milers tomorrow (Monday) and Wednesday.

I chose Novice 2 because even though I'm not a rookie marathoner this time, I still feel like a noob, since I didn't adequately prepare for Shamrock due to my ITBS, and also since I'm not really very far out of my current comfort zone until week 10, when I have a 17-miler, and week 11's 18-miler (which I may try to stretch to 20). Hopefully this means I'll have cooler weather for most of these longer runs.

One of the original, often ignored purposes of this blog was to keep myself accountable, so I'll be giving boring marathon training updates from here till November 20.
Posted by Brian at 9:33 PM