I spent the week silently seething with rage over my highly unsatisfactory -- No! -- disgraceful run on the York County Heritage Rail Trail last week.

So, desperate for revenge, I set out southward from Brillhart Station determined to avenge my death!

Well...ok, the above isn't really true. I was ok with my run last week, but was hoping to do a little both in terms of preparation and distance. And I didn't really die. If I did, you'd be spared further blog posts, obviously.

Anyway, the part about heading south from Brillhart Station is true. It was a relatively cool, overcast morning, and there was even a nice breeze -- which the tall trees around the trail completely blocked. It seemed much more humid on the trail than it did otherwise, and so I think on mornings like this, where clouds are keeping the sun from just beating down on me and the actual temperature isn't too bad, I should probably stay off the trail and just run on the roads here in Manchester.

My preparation was a little better than last week. I remembered to both bring and charge Garmin, which worked really well on this relatively straight course. Although it would lose signal quite often due to (I'm guessing here) weather and the thick vegatation (Geez, Brian, you're making it sound like you were running in the stinkin' Amazon Rain Forest.), it seemed like it would "catch up" when the signal came back. That doesn't work so well on my twisty neighborhood courses, since Garmin assumes a straight line from where it lost signal to where I am when it picks it back up.

Overall, though, this was a nice run. I ran for seven miles, going past Hanover Junction, last week's turnaround point, and turned around. This worked out nicely. Since I take a pit stop at this access point to refill my bottles and eat some Sports Beans before setting out again, it made the run back seem a little shorter than the run down. 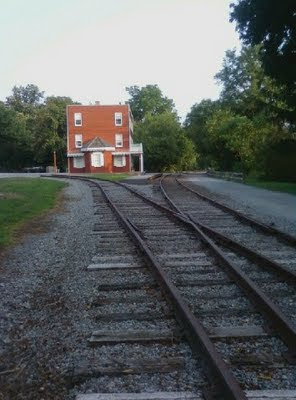 Here's a picture of Hanover Junction. as seen from the south.
Abraham Lincoln's train changed tracks here on its way to Gettysburg for the Gettysburg Address.


Until about mile 12, when my legs started saying "Hey Brian, we don't want to do this any more." I had sweating buckets for the whole run, but I was drinking water and (at that point) watered-down gatorade, and I'd taken a salt tablet before the run and at my pit stop, so I didn't think I was dehydrated or in danger of heat-related injury. I told my whiny legs to shut the hell up, and made i back to Brillhart and the safety of my car. In doing so, I abandoned a crazy plan, hatched at mile 10 when I briefly felt like I could run forever, to head a bit past Brillhart and turn around to add a 15th mile. 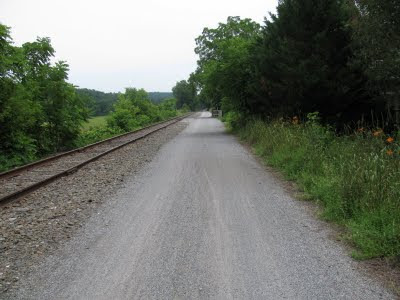 (This is what the rail trail normally looks like.) 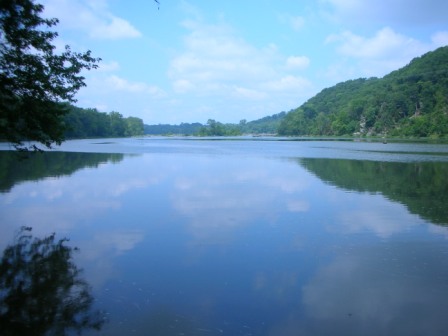 Time to eat the donuts.

People are Still (sort of) Jerks
Like last week, I said "hi" to everyone I passed. However, for some reason I got more responses today. I have several theories:

1. People who were on the trail last Saturday read my blog entry and realized that they are, in fact, jerks.

2. I appeared less creepy than last week. I didn't wear the visor today. Maybe the visor is creepy.

3. People saw how much I was sweating and didn't want to make me angry.