As I mentioned in my last post, we just got back from a great vacation in Montreal. Since I'm training (sort of) for the Philadelphia Marathon, I decided was going to try to get some runs, including a long run, in while we were away. I'd done my homework ahead of time, and found that either running the trails around Mt. Royal or looping around the trails of Jean Drapeau Park, on two islands between Longueuil and Montreal, would probably be my best options.

We drove up to Montreal from the Philadelphia area on Saturday. We waited in line at customs for almost two hours, got into our hotel in Longueuil, across the river from Montreal, at about 9:30. Exhausted, we probably weren't in bed until about 12:30.

Still, I got myself out the door at about six and headed for the stairway up to the Jacques Cartier Bridge. I began my run at the stop of the tall stairway, so the incline across the bridge, with a lower span which crosses to the Ile Sainte Helene and then a taller span that crosses over to Montreal, didn't seem so bad. 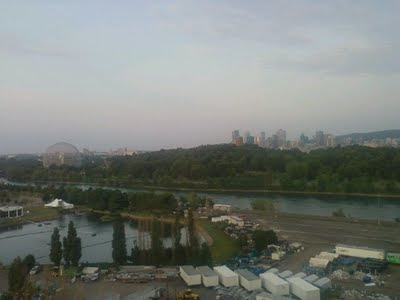 Once on the Montreal side, it seemed that the best route up to Mt. Royal park wasn't readily apparent. Since I wasn't familiar with any of the residential neighborhoods of Montreal, I decided to abandon this plan. Instead, I made a left onto Papineau, figuring that if I kept close to the river it would be hard for me to get lost. I followed Papineau through neighborhoods until reaching Rue Notre Dame at the Molson plant, where I made a right. I followed Rue Notre Dame for what seemed like quite a long way, and then turned left and ran two blocks to the waterfront as I entered what I learned later was Old Montreal. 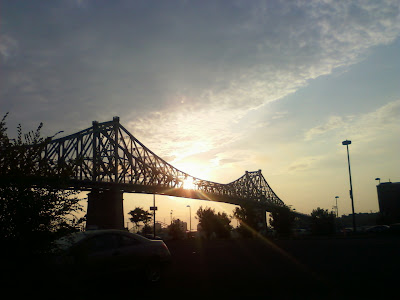 I ran along the quays, enjoying Montreal's picturesque waterfront area, until I reached the beginning of the Lachine Canal. I'd read that the trails along the canal were the best place to run in Montreal, but I was already about 5 miles into my run, so I only made it a little more than a mile down the canal before heading back. 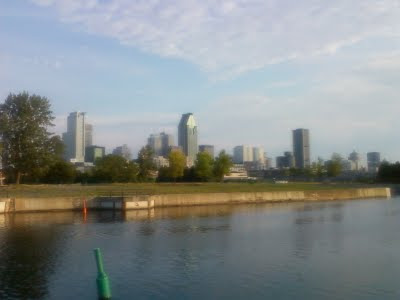 (The Lachine Canal and downtown Montreal)

To return to Longueuil, I reversed the same course, finding the climb up the Cartier Bridge from ground level much more difficult on the return. I also turned off the bridge onto the Ile d Sainte Helene to add some distance through Jean Drapeau Park.

Big mistake. The trails through middle of the park feature some of the steepest hills I've ever run on, the equals of the Dreaded Druid Hills 10K, but this time 11 miles into a run. Still, it was beautiful and interesting scenery, as I saw a fox and Montreal's Biosphere. I also forgot to turn Garmin back on as I paused for a photo break, so I'm ultimately unsure the exact length of this run. It read 13 miles as I reached my starting point back on the Longueuil side of the bridge. I don't think it was 14. It felt more like 20. A tough run, but one of the best ever in terms of neat things seen while running. That won't help me on marathon day, but it made it a humid Montreal morning run more fun. 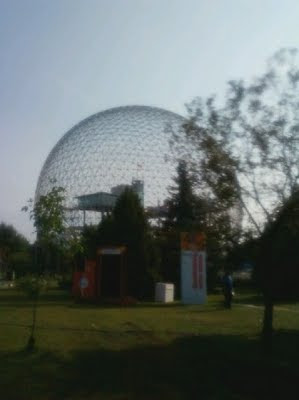 (Pauly Shore was nowhere to be found.)

I would take a shorter, less interesting run on Tuesday, and then abort a planned run later in the trip to give my tired legs a chance to recover. I'm used to running and then sitting and working all day, not walking for hours.

Personnes son Jercs
As I do at home, I greeted fellow runners or cyclists (cheaters!) with a friendly "bonjour!", one of a handful of French words that I know. Very few returned my greeting. A cyclist on Ile Sainte Helene was very nice though, cheerfully pointing out the fox. Unfortunately, the noise of his brakes is probably what prevented me from getting a picture of the animal, but he meant well.

Montreal as a Running City
Montreal apparently doesn't have the best reputation as a running city. However, I found it to be pleasant. The waterfront is beautiful and flat, with parkland out on the quays that unfortunately I missed. The Lachine Canal trail was very pretty, though, and also flat. Once away from the water, Montreal is extremely hilly. It's not called "Flatreal" for a reason. You're not going to have to search far for hills.

Montreal is a GREAT city for biking, perhaps the best I've ever seen. There are bike lanes, separated from automobile traffic by barricades, in high traffic areas, and these are used by runners as well. I'm not sure if I was breaking some taboo by running on the bike paths in Montreal, but I saw many other runners on the bike paths on the Longueuil side during a flatter, more boring 10-mile run on Tuesday.

If you're looking for a great vacation spot and want a place where you can get some runs in, I highly recommend Montreal.